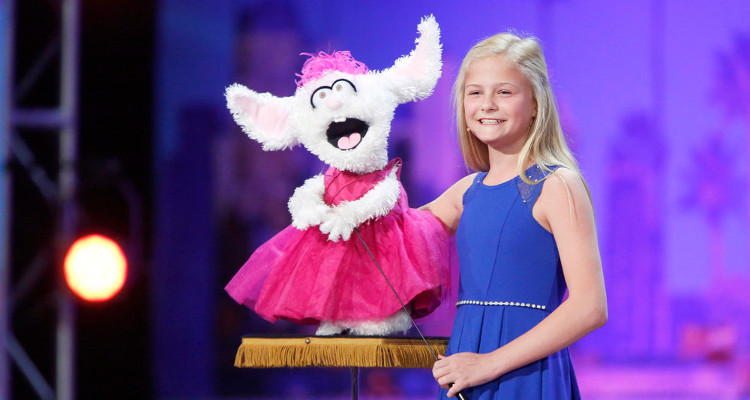 A star is born! Darci Lynne Farmer, the sweet tween ventriloquist, arrived on America’s Got Talent and won the hearts of people everywhere. Her audition was the best way to cap off the America’s Got Talent Season 12 premiere, as she was this season’s first Golden Buzzer! Thank you Mel B! This precious puppeteer and her singing rabbit simply blew the audience away! If you haven’t heard of her yet, you need to crawl out from under that rock and catch up, becasue Darci Lynne is the next big thing! This Darci Lynne Farmer wiki will prove it.

#1. Ventriloquism Got Darci Lynne Farmer Out of Her Shell

Darci Lynne Farmer comes from Oklahoma City, Oklahoma. Right before her AGT audition, she told the cameras why she took up ventriloquism. As a nervous Farmer waited for her turn to perform, the 12-year-old took out her puppet rabbit, Petunia and said they were alike in terms of shyness. “For me it’s always been, you know, hard to talk to people. I’m not good at eye-contact, and things like that,” she said in her introduction.

When Farmer was younger, she first saw a ventriloquist act at a local church and wanted to try it. She took on the craft after her parents gave her a puppet for her 10th birthday. “Ventriloquism, kind of, helped me find my voice. It’s really helped me come out of my shell.”

Also Read: What Happened to Nick Cannon? Did He Quit “America’s Got Talent?”

Though Farmer had a small case of nerves about performing on a national stage like AGT, she has done it before. At the age of 11, she was on NBC’s Little Big Shots, a family-friendly variety show hosted by Steve Harvey and produced by him and Ellen DeGeneres.

And if you had any doubts about her skills in the craft, you’d be surprised at how fast she picked up ventriloquism! Before Little Big Shots, Farmer performed with her doll, Katie, in Edmond’s Got Talent, a local talent show in her hometown. Her ventriloquist yodeling won her the grand prize of $300. Unbelievably, she had only been learning ventriloquism for a month before she won!

Thank you everyone for the awesome comments!! I think I'm still dreaming!! ???darci pic.twitter.com/KnCxR6uDK0

Clarke and Misty Farmer’s sons, Nick, Dalton, and Nate, are active in sports and entertainment just like Darci. But their daughter has also been competing in pageants since she was six.

After being inspired to take up ventriloquism, she learned the craft from Laryssa Bonacquisti, a local pageant participant. Farmer was friends with the 18-year-old Texan when they participated in the Cinderella Scholarship Pageants together. Bonacquisti’s talent segments featured her ventriloquist acts. “I thought it was fascinating and really, really wanted to try it. She gave me advice on how to use certain words and tips so my mouth didn’t move.” said Farmer.

Darci Lynne Farmer had been training in elite gymnastics for 20 hours a week while competing in pageants, and she does really well in school. Farmer’s mother, Misty, was worried if she could juggle ventriloquism with school and gymnastics. “I said we can’t take on one more thing,” said Misty Farmer.

“She would go in the bathroom to practice and come out and do Laryssa’s entire routine. She kept wanting a puppet. I would say, “No, you’re a singer and not a ventriloquist.” But her parents thought it would be nice for her to have a puppet to play with at home and got the cheapest one on eBay for Darci’s birthday.

Farmer has given up on gymnastics, but takes ballet and guitar lessons. She also participates in musical theater. Music and ventriloquism will always be her favorites because it’s “a lot more fun.”

#5. Her Goal is Winning AGT

After winning local talent shows and participating in Little Big Shots, Farmer now has set her sights set on winning America’s Got Talent. Her inspiration is Terry Fator, the Season 2 winner and the first ventriloquist to win AGT. Paul Zerdin of Season 10 was the second ventriloquist to win.

Darci Farmer got to spend 45 minutes backstage with Fator when he performed in Tulsa. He gave her a few tips and advice on doing impersonations with a puppet —which we’re sure she’s going to use on AGT! Since she’s the first one to make it straight to the live shows, can we request a collaboration?

America’s Got Talent airs Tuesdays at 8 p.m. EST on NBC.