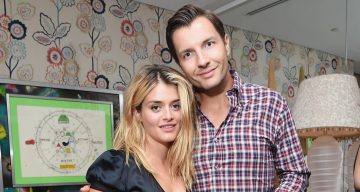 John Jovanovic is a Serbian investment analyst who is married to famous nutrition author and television personality, Daphne Oz. The cute couple has three adorable children together. Despite his hectic work schedule, Jovanovic spends quality time with his family to bond with them. Get to know Daphne Oz’s husband better with some details from our John Jovanovic bio.

What Does John Jovanovic Do?

Born in 1986, John Jovanovic’s age is 32 years old. He is an analyst and investment director who’s currently employed at Mercuria Energy Group. It’s a privately held Swiss commodity trading company that is active over a wide range of energy markets globally.

According to John Jovanovic’s LinkedIn profile, he was previously a member of the Energy Capital and Origination division at Noble Group, a global commodity trading firm. Before that, he was an investment professional at Cadent Energy Partners, an investment firm where he evaluated the energy sector.

Even though Jovanovic is a highly respected professional in his field, he is better known as the husband of Daphne Oz, a nutrition author and television host.

Daphne Oz was one of the five co-hosts on ABC’s daytime talk show, The Chew. She appeared on the show’s first six seasons from 2011 to 2017.

John Jovanovic is the son of Nada Jovanovic Dimitric and Stretko Diminic and is of Serbian descent. His parents settled in Chicago, Illinois, which is where he spent his childhood days.

Meanwhile, Jovanovic’s father owned a contracting firm in Chicago. He passed away in 2017.

After he graduated from high school, Jovanovic enrolled at Princeton University, where he secured a Bachelor of Arts in Politics. He obtained a Master of Business Administration in Finance and Entrepreneurial Management in 2014 from the Wharton School at the University of Pennsylvania.

Jovanovic was ambitious, and he started his career in the financial industry even before he graduated from Princeton University. He landed a position at the Serbia Investment & Export Promotion Agency in 2005 and worked as a summer analyst at Deutsche Bank in 2007. He then joined Berenson & Company as an analyst in 2008.

How Rich Is John Jovanovic?

According to reports, the analyst and investment banker has many luxury cars, homes, and other lavish assets to his name. However, John Jovanovic’s net worth remains undisclosed.

Meanwhile, Daphne Oz’s net worth is currently estimated to be around $12.0 million and counting.

Also Read: Why Did Daphne Oz Leave The Chew?

Jovanovic met Daphne Oz in Princeton University, where they were both in the same class, according to sources. The attraction was mutual, and the couple fell in love quickly.

They both graduated in 2008 and their relationship turned serious. They had talked about their future together and decided that they would marry each other.

They Had Multiple Marriage Ceremonies

A morning ceremony was held at the Synaxis of Serbian Saints Church in Portland, Maine. Then a second ceremony was held in the evening that the same day at the summer home of Oz’s maternal grandparents, Gerald and Emily Jane Lemole, in Cumberland Foreside, Maine.

They welcomed their first child into the world when Oz gave birth to a healthy baby girl on February 26, 2014. They named their daughter Philomena “Philo” Bijou Jovanovic. Her proud and happy father described her as being a blue-eyed Circassian beauty like her mother.

On October 21, 2015, the couple welcomed the arrival of their second child, a son they named Jovan Jr. Their their third child arrived on December 4, 2017, a baby girl they named Domenica Celine Jovanovic.

Life Is Looking Up!

Jovanovic is busy with his career, and when he is at home, his hands are full with taking care of his three kids. Despite his hectic schedule, Jovanovic makes sure that he spends as much time as possible with his children as their mother also has a busy professional life.

With a successful and exciting career, an understanding and loving wife, and a trio of happy children, John Jovanovic is living a healthy and purposeful life.