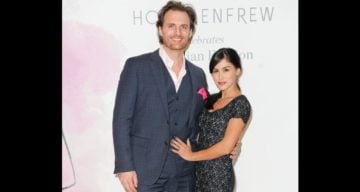 Danielle Nicholas Bryk knows better than anyone the challenges of designing the perfect family space. Her marriage to Frontier actor Greg Bryk and their family life inspired her passion for decorating spaces. Her talent has led to multiple home reno shows, some of them designing spaces for her own family. Now she’s bringing her design expertise to HGTV’s Generation Renovation: Lake House, where she redesigns a lake house to have a low-carbon footprint. She’s no newbie to the home reno genre, but if you haven’t caught up with this amazing decorator already, our Danielle Nicholas Bryk wiki is the perfect primer on her.

Danielle Bryk Is an Interior Designer Featured on TV

Born Danielle Nicholas on November 2, 1972, she is a native of Canada. Danielle is the youngest of four siblings, including Terry Nicholas, who was featured in the show, Bryk Cottage.

Happy Birthday Baby. I have sailed for decades under a pirate flag and drowned in your sunken treasure. You are the storm, the seductive sea and the rocks beneath the waves. You are a siren’s call. An adventure. Thrilling and daring. My Queen. No one is perfect. But some shine brighter. You dazzle. Blindingly. You fill my sails with black magic and dangerous dreams. As you age your charms only become more profound. Oceans deep. I can not wait to conquer the horizon for you in the decades yet to come. Love, Me

As a child, Danielle Nicholas was naturally inclined towards design, constantly rearranging the furniture of the family home. Her mother was nothing short of a decorator herself. After Nicholas became a mom, she rediscovered her passion and became a professional interior designer.

Once she was married to Greg Bryk, his growing acting career took them places and they moved a lot. But the then-new parents didn’t have much money to fix every home they moved into. That’s where Danielle’s design talent kicked in and she fixed and decorated spaces herself.

Her carpentry and painting skills evolved until she was being sought out by others to renovate their houses. That’s when she got licensed and insured as a professional decorator.

A graduate of Queen’s University in Kingston, Ontario, Canada, she went on to study design at Parsons New School in New York City.

Danielle and Greg transformed a dilapidated, three-story drug-addict haunt into a home for them and their kids. The whole renovation process was documented on their own HGTV show.

Generation Renovation: Lake House is Danielle Nicholas Bryk’s latest show that premiered on HGTV on June 15. On this new show, Bryk attempts to renovate a lake house to have a low-carbon footprint.

Her sister, Terry Nicholas, is a fashion graduate and a frequent collaborator in Nicholas Bryk’s business. She not only styles her sister for her TV appearances, but she also styles the homes Nicholas Bryk fixes. Terry Nicholas and Danielle Nicholas Bryk also own the fashion accessories and home décor brand, Saint & Soeur.

Also Read: Everything You Need to Know about, Joanna Gaines, the Home Reno Superstar From Fixer Upper

Danielle and Greg Are College Sweethearts

Danielle Nicholas graduated from Queen’s University in 1995. She is a Dean’s List Honour Graduate with a degree in English Literature and Art History.

Greg Bryk graduated a year before, with a degree in drama. It was while they were in college that the Queen’s football star met his future wife.

“We met at Queen’s University where we were English literature students. The first time I saw Danielle across a courtyard, my knees went weak. I finally met her the next fall on the night I was cast as Hamlet in my first play. I walked her home from the campus pub. She offered to lend me mittens, which were up in her room. We talked until dawn. I kissed her. Our life began,” Greg described their whirlwind romance.

They lived in New York together while she attended Parsons and worked in a SoHo art gallery. He was studying at the Circle in the Square Theatre School. They were expecting parents living in a tiny apartment back then.

Greg proposed to Nicholas in their kitchen. The next day, instead of engagement rings, they got each other’s names tattooed on their ring fingers.

Danielle and Greg’s Children Are Actors

Dempsey grew up both in New York and Canada. After going to theater school in New York, he is currently based in California, where he’s pursuing his acting career.

Dempsey began his professional acting career, outside of appearing in his mom’s home reno shows, in 2017. He’s made appearances in Saving Hope, Black Mirror, Mary Kills People, and Ransom.

His major roles include appearing in The Birch, Timeline, and Heartland. He also worked alongside his father recently in the Ian Somerhalder show, V-Wars.

Greg and Danielle’s younger son, William “Billy” Nicholas Bryk was born on October 31, 1999. Billy Bryk’s own professional acting career recently began with an appearance in Jett, in the same episode as Dempsey.

Fun to be a part of this month’s Toronto Life Magazine. Check it out on newsstands now. #TorontoLife @torontolife #GreatSpaces #TorontoLifeMagazine #Design #BrykHouse Portrait over our heads is by @gordon_shadrach

The youngest Bryk, Ella Bryk, was born on June 3, 2003. Ella hasn’t ventured into acting yet. But she does have experience with cameras thanks to her appearances on her family’s shows. She’s also a new arrival in the YouTuber space.