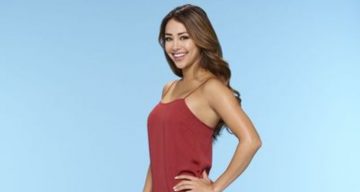 There have only been two episodes of The Bachelor season 21, but we’re already beginning to see which contestants are taking up most of the screen time! Danielle Lombard, 27, is not one of them. She’s got all the potential but doesn’t seem to have the ambition. Until we see more of her on screen, we’ve got some hot Danielle L. from The Bachelor Instagram photos to show you!

Danielle L. from The Bachelor is gorgeous, she started her own business when she was 23 years old, and she’s a successful model. With smarts and a sexy figure, there’s no reason she shouldn’t get more screen time… however, some contestants may be saving their energy and drama cards for later in the show. Check out these jaw-dropping Danielle L. pics, and be sure to watch the upcoming episode. We’re hoping to see more of Danielle L. and find out if her and Nick Viall have any real chemistry!

Each contestant is attractive in her own way, and bears her own set of unique skills, but based on episode two, it really comes down to which woman is willing to fight for Nick. Nick has already suffered loss three times in a row, and this is his fourth chance to find love on reality TV. Perhaps he’s too tired to be the one to put in all the initiative this time around, so Danielle, you better step it up!

About to board a flight back home from Thailand so I’m going to miss the premier. But tune into @abcnetwork @bachelorabc @bachelorusa at 8PM and let me know what you think! Can’t wait to watch when I’m back in the states ????

Corrine Olympios’ aggressive way of getting his attention (even if it means interrupting one-on-one time with Nick and other contestants, or just baring it all to Nick in the pool) has shockingly been working in her favor. Nick hasn’t penalized or chided Corrine for her bold ways, even when she took her bikini top off while they got in the pool together and interrupted Taylor Nolan’s personal time with the bachelor. Contestants like Corrine will most likely get the screen time because people enjoy watching the drama unfold!

Another contestant who stole a fair chunk of camera time was Liz Sandoz, who openly shared her one-night-stand with Nick with all the other women… and wrote him a super awkward breakup letter when the activity was meant to be a fun and enjoyable time. Basically, Nick appreciates honesty, but he’s no fool. He saw through Liz’s spoken motives and simply could not trust that she is only on the show to pursue him. Nick believes that since she never tried to get in touch with him after their one night stand months earlier before the show, she’s only here to gain fame from the show. He sent her packing and boy, did she look ashamed!

Re-watched Ep.2 again and felt tense! Next episode I will be fully equipped with readily accessible wine and ice cream ???? However, I still had an incredible first group date in my @missguided crop top, cruisin ‘ the streets of LA in our drop top! #bachelor21 #groupdates #sharingscaring

These contestants have all the spotlight while contestants like Danielle L. don’t get much at all. Why could this be? It could be speculated that the show runners are saving her for later in the show, or it could mean that Danielle L. isn’t really interested in Nick at all. The contestant loves modeling and it’s one of her biggest aspirations. The show would give her the opportunity to be seen before the world and would certainly do wonders for her career. She already had success modeling in bikinis for projects like promoting Transworld Motor Cross, and acting in a reality television series is already giving her more global attention.

Fans will have to be patient and see how episode three unfolds… will Danielle L. get more screen time? Will her and Nick get enough alone time for her true intentions to show? Does she really want a shot at love or is she milking the show for it’s worth? Tune into ABC Monday nights at 8:00 p.m. EST to find out!