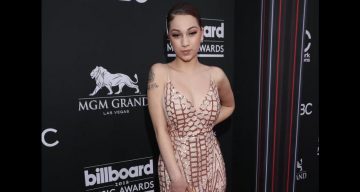 In 2018, Internet trolls claimed they had access to nude pictures of Danielle Bregoli, who is also known as Bhad Bhabie. The “Cash Me Outside” girl went from Internet sensation to a chart-topping rapper seemingly overnight. So, it’s no surprise that scandals follow her. Most recently, Bregoli was hospitalized after experiencing severe stomach pains. Keep reading to know the truth about Danielle Bregoli’s leaked nudes, celebrity feuds, and her health.

Danielle Bregoli was one busy girl in 2018! She celebrated a Billboard nomination for her hit single, “Hi Bich,” shot a reality show on Snapchat, and ignored haters while getting into heated brawls with Woah Vicky and Lil Tay. In summer 2019, she was hospitalized after experiencing stomach pains during a flight from Fort Lauderdale to Los Angeles and called out legendary producer Jermaine Dupri. So, she probably doesn’t have the time to worry about a handful of NSFW pics of herself on the Internet.

Of course, it’s the Internet’s job to blow everything out of proportion. So, we’re here to bust the myth about Danielle Bregoli’s nudes, which are allegedly circulating in cyberspace.

Danielle Bregoli took over the Internet the day she said in her signature accent on Dr. Phil, “Cash me outside.”

Since then, the Instagram sensation has gotten in the faces of one too many celebrities and launched a rap career.

While being Internet famous is the best kind of famous today, it also has its downsides. That includes unsolicited intrusions and excessive curiosity.

So, if people see a post promising Danielle Bregoli’s nude pictures, a few curious minds are very likely to click on the link. But they will end up with something else, of course.

Many other celebs have nude pics circulating the Internet, and now the same is being said about Bhad Bhabie. While it may be true for some celebrities, Bregoli’s nudes haven’t been exposed in the digital domain.

So, if you come across a link claiming to direct you to the young rapper’s nudes, there’s a high chance it’s clickbait. And the culprit behind the rumors about Danielle Bregoli’s pics appears to be Malu Trevejo, one of her many famous haters!

Trevejo, another online celebrity with the same niche audience, has an ongoing feud with Bregoli. The two were reportedly friends, but things soured when NBA YoungBoy allegedly cheated on Bregoli with Trevejo.

Also Read: Meet Malu Trevejo, the Teen Who Has a Beef with Bhad Bhabie

Their feud got so bitter that Trevejo allegedly exposed a nude video of her rival. However, the chances that happened are slim to none. Nonetheless, Trevejo made explosive claims about Bhad Bhabie in videos.

Reddit, Twitter, and YouTube users have called out trolls for baiting people with alleged nudes of the Internet sensation. Bregoli is, after all, only 16! Claiming to have nude pictures of a teen (even if there aren’t any) is bound to have consequences.

Bregoli’s Instagram can be pretty NSFW—both visually and verbally. And although some say that they have some of Danielle Bregoli’s nip slip pics, she hasn’t bared it all yet, contrary to claims.

If your social media feed does give a link to alleged Danielle Bregoli nudes, feel free to ignore it.

The supposed leak may have been related to Bregoli’s Billboard nomination. If you recall, Bregoli was nominated for Best Female Rap Artist alongside two of her female rap artists (who also seem to be involved in a long-running feud of their own), Nicki Minaj and Cardi B.

Although she loves and respects both women for their contributions to the music industry, Bregoli admitted in an interview with the magazine that she prefers Cardi B– who won the award–over Nicki Minaj.

As if Bregoli wasn’t famous enough for all the wrong reasons, she now has her own reality show on Snapchat called Bringing Up Bhabie. The profanity-laden episodes of the show can also be found here.

With a whopping 1.3 million views and counting, it’s pretty safe to say that Bregoli will be giving the Kardashians a run for their money!

In the show’s preview, she bluntly talks about her fast success, stating, “I went from sleeping on the floor in a trailer to having a gold record in six months and then another one goes gold and I got even more haters! Then I get nominated for a f*****g Billboard [award] and I’m the youngest b***h to ever do it. Keep hatin’, h**.”

It seems as if Bregoli’s success knows no bounds and no matter what she says or does, people just keep eating it up.

In June 2019, Bregoli was flying from Fort Lauderdale to Los Angeles when she started complaining to her manager and the flight crew that she was experiencing severe stomach pains.

Prior to takeoff, Bregoli had to be removed from the flight by her handlers and doctors because the pain was too intense for her to handle. She was taken to the nearest hospital where doctors ran a series of tests on her, all of which came back negative.

To date, the cause of her stomach pains hasn’t been revealed. Doctors simply advised her to rest and take it easy for a few days before resuming touring. She has yet to release a public statement regarding this recent health scare.

Danielle Bregoli, aka Bhad Bhabie, is a moneymaking machine! After being launched into stardom as an Internet sensation as the “Cash Me Ousside” girl at the age of 13, she now has a few lucrative endorsements under her belt. In January 2019, she became a brand ambassador for CopyCat Beauty by signing a $900,000 endorsement deal.

In July, she signed an even more lucrative publishing deal with Pulse Music Group to the tune of $1.0 million with a $350,000 upfront payout!