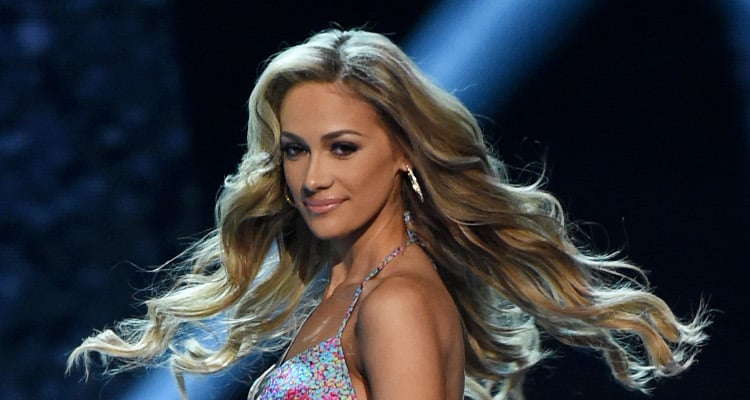 Daniella Rodriguez could barely speak when her boyfriend Carlos Correa proposed to her on national television, after his team, the Houston Astros, won the 2017 MLB World Series last night! The beauty queen gasped and was finally able to say yes to her boyfriend, who is now the happiest man in the world. Here are some sexy pics of the delighted lady!

The Houston Astros winning the 2017 MLB World Series couldn’t have happened at a better time for Carlos Correa. Not only did he get to hold the coveted Championship trophy, another dream of his came true. He was able to propose to his girlfriend, Daniella Rodriguez right in front of a national audience, and she couldn’t have been happier! Correa planned to propose to Rodriguez for a while, but he was waiting to do it on a national stage, “I was like OK, so we have a championship caliber team, so let me wait it out to see if we can be champions and do it at the big stage. So, we were able to win the game, which was the first part of my day to accomplish, and then I was able to do it.”

Correa got down on one knee in front of his lovely lady saying, “Daniella Rodriguez, will you make me the happiest man in the world? Will you marry me?” Rodriguez was stunned and clasped her hands over her mouth and repeatedly began gasping and saying, “Oh, my God!” When she got over the shock, she said “yes” to his proposal. Correa got his team’s clubhouse manager to bring the ring from his locker at Dodger Stadium, as he stepped out on the field. He said, “I’m like, ‘I don’t want to jinx it, but if we get these three outs, bring me my ring, make sure you don’t lose it. He was able to bring it in, and I talked to Ken Rosenthal, and we were able to do it.”

Rodriguez was just 16 years old when she won the title of Miss Texas Teen USA, and three years later she scored a double whammy by winning the senior title. Talking about her experiences at winning both titles she said, “You have fun at miss, but at teen, it is always more bubbly and cute and having fun with everything. And with miss, it is more responsibility. You have to be able to balance yourself right.”

Happy with my fluffy heels ☺️

2) Splendor on the Grass!

4) The Winner Takes it All!

In honor of Miss USA being tonight here's a throwback of my special moment on that beautiful stage✨ Sending lots of prayers to @n4ncygonzalez ? #MissTXUSA #MissUSA

Oh, what a day, what a lovely day! ?⚾️ #OpeningDay

7) Hanging out with Her Best Friend