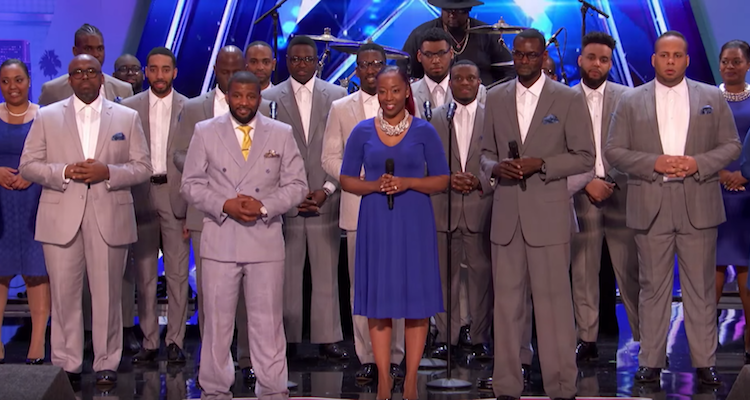 DaNell Daymon & Greater Works members are a contemporary gospel choir made up of both men and women between the ages of 24 to 59. They come from Seattle, Washington, New York City, Portland, Atlanta, Portland, and more. Daymon is the group’s vocal director and he lived in Seattle for the last 17 years. He moved to D.C. in 2016 to become a choir director of a local Baptist church. Daymon founded the choir in 2010.

Damon and his gospel choir made quite the impression during their America’s Got Talent audition. They sang a modern rendition of “This Little Light of Mine” and were immediately sent to the next round, the Judge Cuts. For those who know him by reputation, Simon Cowell isn’t easy to impress and has sat in front of some of the most horrible singers from his American Idol days. According to News Tribune, DaNell Daymon & Greater Works sent five audition tapes to AGT, before the producers were satisfied and won over by their arrangement of “Proud Mary.” And of course, their talent paid off and landed them an audition that the judges will never forget.

When Seal was a guest judge, the choir sang “Ain’t No Mountain High” and it had the singer dancing out of his seat.

“There was a joy that filled this room when you started singing,” Seal said. “You got me out of my seat. I loved it.”

Judge Howie Mandel also loved their performance and wasn’t afraid to shower them with praises.

“You took this Jew to church,” Mandel said in June.

Their performances have earned them standing ovations from not only the judges but the audience as well.

It’s time for Tuesday’s quarterfinals and the choir have been rehearsing for five hours a day, seven days a week in Los Angeles. The group hasn’t revealed what they will be singing but we can only assume it will be another song worthy of yet another standing ovation. They have to compete against many other singers and dancers this week, but something tells us that they have what it takes to move on to the next round. Could they be the next recipient of the $1.0 million including the chance to perform future shows in Las Vegas? It’s anyone’s guess who will take home the prize, but if a gospel choir can make a believer out of Mandel and Cowell, then they are definitely talented! We hope all that non-stop rehearsing will pay off in the end.

Don’t forget to watch Tuesday’s live episode of America’s Got Talent on August 28 at 8:00 p.m. EST, on NBC!