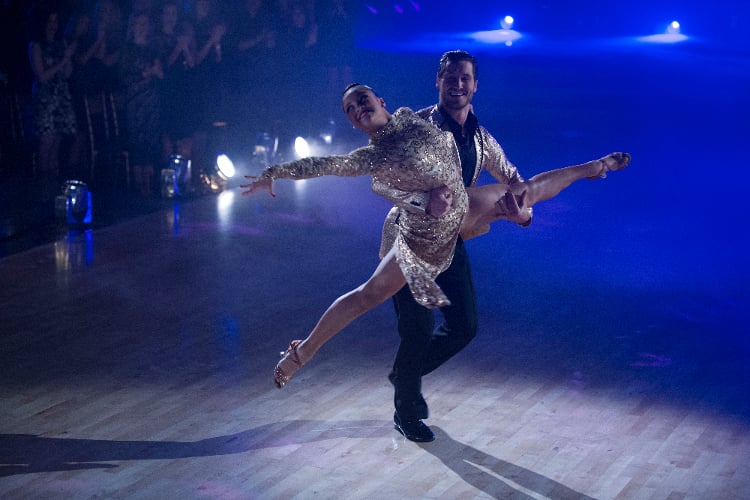 The 16-year-old gymnastics prodigy, and her professional dance partner Val Chmerkovskiy have won the highly coveted Mirrorball trophy. Congratulations to the pair on a well-deserved win! The duo beat out James Hinchliffe and Sharna Burgess who came in second place, while Calvin Johnson Jr. and Lindsay Arnold placed third. There is no longer a need to wonder who won Dancing With the Stars season 23. We’ll give you all the updates on who won DWTS season 23, and reveal the Dancing With The Stars season 23 winner.

The much-awaited Dancing With The Stars season 23 finale saw the 13 contestants boil down to the top three pairs: Olympic gold medalist Laurie Hernandez and Val Chmerkovskiy, IndyCar race driver James Hinchcliffe and Sharna Burgess, and retired NFL star Calvin Johnson Jr. and Lindsay Arnold. The competition was fierce as the top three finalists ranked within a few points of each other. Judges Bruno Tonioli, Carrie Ann Inaba, Len Goodman, and Julianne Hough flashed placards of nines and tens all night as the three finalists put their best foot forward in their last and final performances of season 23.

Last night’s (November 22) Dancing With The Stars finale episode was broadcast on ABC  live from The Grove in Los Angeles, and featured special dances by all the previously eliminated participants. In the spirit of the holiday season, all the female dancers were dressed as Santa, and the stage was dimly lit in blue with a snowy Christmas theme. Finalists James Hinchcliffe and Sharna Burgess kicked off the Dancing With the Stars season 23 finale with a beautiful Quickstep, after which the former Detroit Lions wide receiver, Calvin Johnson Jr., and the talented Lindsay Arnold performed a sensual dance to “Hotel California.” In between their performances, host Tom Bergeron gave audiences a quick peek behind the scenes into the dance rehearsals and treated them to a montage of the former contestants.

For their final performances of the season, Hinchcliffe and Burgess picked a breathtaking Viennese Waltz and Foxtrot combo that left audiences wanting more, while Calvin Johnson Jr. and Lindsay Arnold pranced around the stage in bright rhinestoned costumes, performing a medley of a Quickstep and Jive. Last but not the least, Laurie Hernandez and Val Chmerkovskiy stunned audiences and judges alike in the last performance of the night with an effortless and brilliantly timed fusion of Argentine Tango and Foxtrot. The tension in the room was mounting as DWTS hosts Tom Bergeron and Erin Andrews announced that Calvin Johnson Jr. and Lindsay Arnold placed third, while Laurie Hernandez and Val Chmerkovskiy won the Dancing With The Stars season 23 Mirrorball trophy.