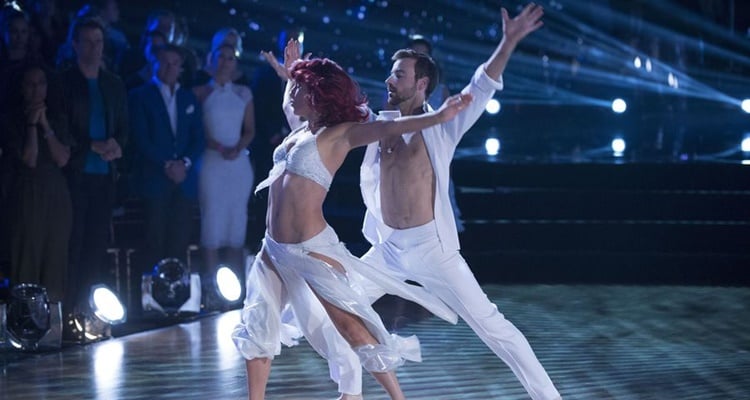 Dancing With The Stars season 23 is almost at its end. All that remains to be seen is who will take the mirrorball trophy. After Jana Kramer and Gleb Savchenko were eliminated on Monday night, three pairs are left vying for the prize.

Last night, we bid adieu to Jana Kramer and Gleb Savchenko from the first day of the Dancing With The Stars finale. Kramer was a fan favorite, and her elimination came as a shock. It just shows how close the competition is! Laurie Hernandez and Val Chmerkovskiy, Calvin Johnson and Lindsay Arnold, and James Hinchcliffe and Sharna Burgess are the top three finalists of this season. One of them will be crowned the winner at the end of tonight’s (November 22) season finale. It’s always fun to take a look at the odds and predict who will win. Let’s take a look at some Dancing With The Stars winner predictions to see who is the top contender to win DWTS season 23.

Who Will Win DWTS Season 23?

The very best dancers are left standing after the Monday night’s (November 21) episode. This season, a few contestants danced better than anyone expected. The top four were neck-and-neck, with only a point or two separating them. Kramer and Savchenko’s elimination showed that this season could be anyone’s game. Among the remaining three couples, it’s tough to tell which way it will go.

Olympic Gymnast, Laurie Hernandez, and her partner Valentin Chmerkovskiy have proved themselves to be top contenders from the very start of the season. It was expected from the start that Hernandez would make it to the finals, and it won’t be a surprise if she won the competition in the end.

The young gold medalist is blessed with talent not only as a gymnast, but it appears in dance as well. Besides always dominating the top of the leaderboard, she has had four consecutive perfect scores and a total of five perfect scores. When it came to popularity, Laurie Hernandez and Jana Kramer were pretty much equal. So with Kramer out of the competition, Hernandez could add the mirrorball trophy to her Olympic medals.

James Hinchcliffe came into the competition as an IndyCar racer with next to no dancing experience. But he proved to be the breakout star, improving week after week and moving up the leaderboard. His scores are consistently close to Hernandez, each one only a point or two behind the other. Many might expect that Hinchcliffe might be the one to claim victory in the Dancing With The Stars season 23 finale.

Hinchcliffe had a tough year before joining DWTS. The race car driver had only just recovered from a near-fatal car crash. But when you see his graceful moves on the dance floor you’d strain your eyes looking for even the slightest sign of injury. Week after week, Hinchcliffe improved, thus amazing the judges. Some predict that he and partner Sharna Burgess might be tied with Hernandez and Chmerkovskiy. Nevertheless, it’s undeniable that James shows potential to be a winner.

Former NFL star, Calvin Johnson Jr., might have the lowest number of odds in his favor, but you can’t just write him off yet. Many thought that Johnson and partner Lindsay Arnold would place fourth, with Kramer and Savchenko being a shoo-in to the top three. But Johnson proved himself a top contender by making it into the final round. He began Dancing With The Stars season 23 with low scores, but as the competition progressed, so did his skills.

Johnson’s strength was in taking the judges’ critiques and applying it to his next routine. His professional dancing partner, Lindsay Arnold, did a great job channeling Johnson’s athletic strength and power, his winning smile, and sportsmanlike grace in his dance. This season, Johnson did spins and lifts with Arnold like she was a football, and awed both judges and audiences.

The general consensus predicts that Laurie Hernandez and Val Chmerkovskiy will be the victors, with James Hinchcliffe and Sharna Burgess coming in with a close second. But you never know, Calvin Johnson and Lindsay Arnole might be the surprise winners! There is honestly no telling who will win Dancing With the Stars season 23. The judges’ scores and the votes from last night (November 21) will be tallied to declare the winner on tonight’s (November 22) season finale.

Vote for your favorite contestant, and tune into ABC tonight (November 22) at 9:00 p.m. EST to find out who will take the mirrorball trophy for Dancing With The Stars season 23.