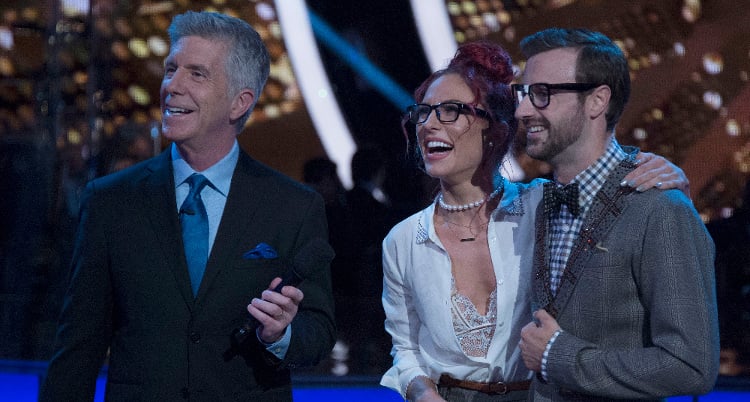 Who got eliminated on Dancing With the Stars tonight? Jana Kramer and Gleb Savchenko go home, leaving the top three finalist to compete in the DWTS season 23 finale!

The first part of the Dancing With The Stars season 23 finale aired tonight (November 21), and millions of Americans tuned in to watch and vote for their favorite couples. The competition is getting fierce, and the judges are having a difficult time taking a decision. After Terra Jole and her partner Sasha Farber were eliminated in last week’s semi-final, the four couples left were Laurie Hernandez and Val Chmerkovskiy, Jana Kramer and Gleb Savchenko, James Hinchcliffe and Sharna Burgess, and Calvin Johnson Jr. and Lindsay Arnold. Here is everything you need to know about tonight’s DWTS results, including the top three finalists who made it to the next round!

Dancing With The Stars Season 23 Finale: Who Went Home Tonight?

The final four stars included an IndyCar driver, a former NFL player, an Olympic gold medalist, and a singer-actress, bringing diversity to the DWTS stage in terms of talent, artistry, and execution. The top three dancers will compete for the coveted Mirrorball trophy, which will be awarded to the winner with the most number of votes. The 13 pairs at the beginning of DWTS season 23 boiled down to only four as judges Julianne Hough, Len Goodman, Bruno Tonioli, and Carrie Ann Inaba painstakingly eliminated participants by rating them on style, technique, and flow of movement.

In tonight’s (November 21) episode of Dancing With the Stars, the retired Detroit Lions wide receiver Calvin Johnson Jr. and his pro partner Lindsay Arnold danced the Vietnamese Waltz, while race car driver James Hinchcliffe and his pro partner Sharna Burgess performed a breath-taking foxtrot to Harry Connick Jr.’s “It Had to be You.” Considered to be the strongest contenders in DWTS season 23, 16-year-old Olympic gymnast Laurie Hernandez and Valentin Chmerkovskiy showed off their moves in a Paso Doble, while the formerly flu-stricken Gleb Savchenko and country singer Jana Kramer tangoed to Zedd’s “Stay the Night.”

It should have come as no surprise to spectators that the “Why Ya Wanna” singer Jana Kramer and her Russian dance pro Gleb Savchenko were eliminated at the end of tonight’s episode. The duo were ranked in last place after the semi-final episode, and faced more obstacles over the weekend when Savchenko came down with the flu. While DWTS troupe dancer Alan Bersten stepped in for rehearsals with Kramer, there were doubts about Savchenko recovering in time for the finale. However, the 33-year-old dance pro powered through when the couple glided across the dance floor to Sia’s “Unstoppable.”

The other three finalists Calvin Johnson Jr. and Lindsay Arnold performed their freestyle dance to a “Please Mr. Postman”/”I Want You Back” medley by The Marvelettes/Jackson 5, while James Hinchcliffe and Sharna Burgess performed to “Beethoven’s 5 Secrets” by The Piano Guys. Unsurprisingly to fans, Hernandez scored a perfect score of 40 in her freestyle dance to “Brand New” by Ben Rector. In the last moments of the two-hour finale show host Tom Bergeron announced that Jana Kramer and Gleb Savchenko would be leaving the show.

After the elimination of Kramer and Savchenko, Dancing With the Stars is left with three finalists Laurie Hernandez and Val Chmerkovskiy, James Hinchcliffe and Sharna Burgess, and Calvin Johnson Jr. and Lindsay Arnold who will face off against each other for the prestigious DWTS Mirrorball trophy. Don’t miss part two of the Dancing With the Stars season 23 finale episode which will air tomorrow night (November 22) at 9:00 p.m. EST only on ABC!