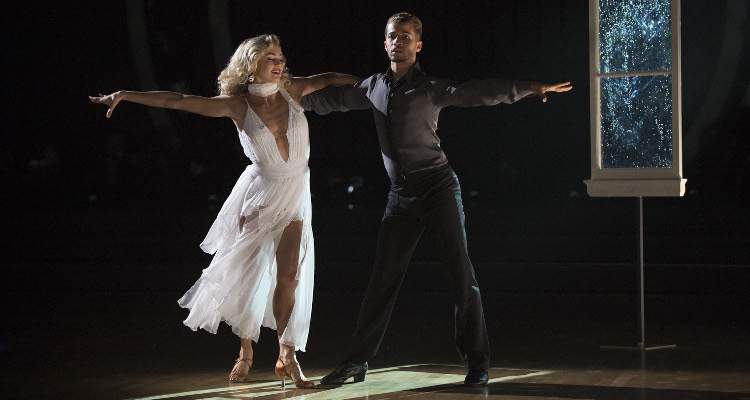 Dancing with the Stars got pretty scary on Halloween eve. And, we didn’t see it coming. Two couples were sent home in a double elimination shocker that we did not expect.

Halloween eve night ended with a jaw-dropping trick with no treat on Dancing with the Stars. It was a heart-stopping and dramatic twist to cap off a night of thrilling horror theme routines. And, after seeing some of the most inventive routines and the best scores of the season, we were thrown for a loop by a surprise double elimination.

So, which two celeb-pro couples went home on Dancing with the Stars last night? Keep reading to find out.

Tricks and No Treats

The remaining DWTS cast of celebs and pros pulled out a bagful of tricks in the ballroom, scoring high numbers. Jordan Fisher and Frankie Muniz tied at the top of the leaderboard with a perfect 30. The celebs performed Halloween-themed routines with their pro-partners in the first half of the night before breaking into two teams to perform.

Team Monster Mash consisted of Terrell Owens, Jordan Fisher, Lindsey Stirling, and Nikki Bella. They performed first, and the judges gave them a 24 out of 30.

Victoria Arlen, Vanessa Lachey, Frankie Muniz, and Drew Scott made up Team Phantom. And, they snagged a perfect score for their performance.

As exciting as the night was, it quickly turned dreary when Tom Bergeron and Erin Andrews announced it was time for elimination. Oddly, Bergeron announced that there were four couples in jeopardy—Drew and Emma, Terrell and Cheryl, Nikki and Artem, and Vanessa and Maksim.

Drew and Terrell were safe. And we were expecting one of the ladies to move on to the next week until Bergeron delivered the unexpected news in the final seconds of the broadcast.

Bergeron said, “Vanessa and Maks, Nikki and Artem, in this seventh week of competition … it is a double elimination. You’re both going home!”

Vanessa and Nikki were two frontrunners, so we thought they’d make it to the finale. The shock was obvious and could be seen on the faces of their fellow dancers, while the ladies and their partners took it with grace. The live audience echoed our thoughts as the ballroom was filled with boos after the double elimination.

Nikki and Artem danced a jive for their final dance in the competition. Meanwhile, Vanessa and Maks did a Paso. Both scored a 24 out of 30 for their spooky routines.

It’s been a tough week for #TeamBabiesAndBallroom. Vanessa and Maks will be following their respective spouses, Nick Lachey and Peta Murgatroyd, who were eliminated last week.

The dancing duo has been dogged by rumors that things were frosty between them during rehearsals. But, Vanessa slammed the rumors that she’s not getting along with her partner while Maks downplayed the tension between them.

Although it’s goodbye for Vanessa and Nikki, we can still watch some of our favorites returning to the ballroom. The remaining six couples will return to the ballroom for Trio Night, where a DWTS alum from a past season will join them. This would be certainly something to look forward to after the heartbreaking elimination this week.

And, the ballroom future is uncertain for Lindsey and Mark since the violinist has suffered a rib injury. That would mean another frontrunner for the Mirrorball Trophy is down.

As astonishing as the double elimination was, Vanessa and Nikki couldn’t say their goodbyes to the viewers. They were instead treated to hugs by the other celebs and pros.

Tom Bergeron said at the end of the show, “Vanessa and Maks, Nikki and Artem, a double elimination shocker at the end of our Halloween Night show.”