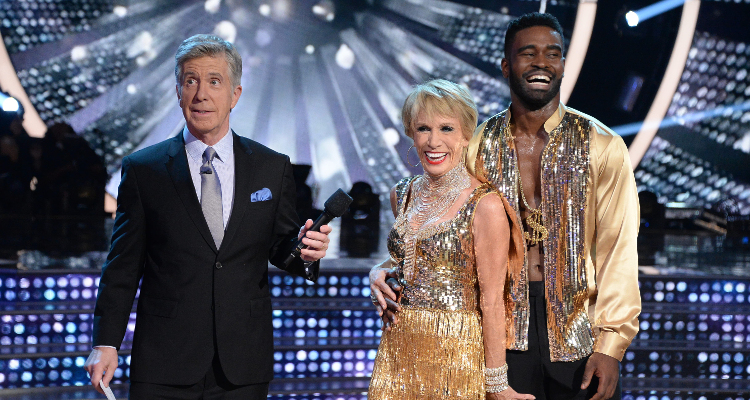 The glitz and glam of the ballroom are back to make Mondays more exciting. 13 celeb-pro couples danced for votes in the season premiere of Dancing with the Stars 2017. Who went home after the first week of performances?

Most pros had a few weeks to get their celeb partners ready to perform for premiere night. But in Week 2, the pressure was on, and it’s taken a toll on the performers. Injuries were a running theme in the ballroom this week. Not only did Debbie Gibson dance through the remnants of Lyme disease, but Frankie Muniz dealt with an old back injury, and fresh casualties cropped up this week.

Reigning Mirrorball champion Emma Slater’s Property Brother partner, Drew Scott, suffered a hamstring injury during rehearsals, and it was caught on camera. “I felt, like, a knot pop in my hamstring,” said Drew as he limped, “It felt like a snap.” On the other end of the ballroom, one of last week’s front-runners, Vanessa Lachey suffered a bloody toe injury. Maksim Chmerkovskiy was worried about his partner, but Lachey got through it after shedding a few tears.

Gibson didn’t let her illness slow her down as she danced a super-fast quickstep with Alan Bersten. She made a remarkable improvement from last week with a score of 20 out of 30. While Gibson picked up the pace, Nikki Bella softened it for this week with a waltz. She and Artem Chigvintsev took the judges’ criticism from last week and worked on it, earning a score of 21 this week.

Lindsay Stirling and Mark Ballas set a high bar for themselves last week. So she bore the brunt of the criticism this week, though Ballas’ choreography of their quickstep got a thumbs up. With 21 points, they couldn’t raise their score from last week.

Barbara Corcoran and Keo Motsepe did a sultry tango, and the Shark Tank diva sure brought her A-game. Without a doubt, she showed a lot of improvement in one week. She was at the bottom of the leaderboard last week and this week with a score of 17, but even the judges noticed that she improved.

Nick Lachey and Peta Murgatroyd’s foxtrot was hampered by a slight wardrobe issue, and Len Goodman wasn’t having any of it. Lachey’s the underdog of the season, but he’s slowly but steadily improving. For his efforts this week, he earned a 19.

Drew Scott and Emma Slater quickstepped through Scott’s injury and he was way better than he was last week. Injuries can bring about miracles! Bruno Tonioli called it a “fantastic luxury performance.” He moved up from last week with a score of 20.

Like Scott, bleeding toes couldn’t stop Vanessa Lachey as she foxtrotted like a boss. She’s still at the top of the pack with a score of 24.

Muniz’s back injury prevented him from arching too much, which could be a problem for his partner, Witney Carson. But he gave it his all to be better than last week and it paid off. The judges were impressed by his tango and gave him a 23, putting him second on the leaderboard for this week.

Terrell Owens and Cheryl Burke brought the sexy for their foxtrot, which got some mixed reactions from the judges. They got a score of 20, but we think Burke deserves a 100 for showing Owens who’s boss.

Sasha Pieterse impressed the judges with her natural dance talent, but Gleb Savchenko’s choreography fell short. She tied with Muniz at 23, but is in no danger of leaving the ballroom anytime soon.

Victoria Arlen once again dominated the ballroom with her tango. Maybe her partner Val Chmerkovskiy knows she can kill it and that’s why he doesn’t go easy with his choreography. She’s tied at the top with a score of 24.

Derek Fisher impressed with his natural showmanship and Sharna Burgess’ dazzling choreography. But his lack of technique is beginning to show. He couldn’t impress enough to get more than a score of 19.

Moving on to the other Fisher to close the show, Jordan Fisher established he’s the one to beat. There was nothing bad about his and Lindsay Arnold’s flawless Viennese waltz, and we think he deserved more than that 24.

It came time to announce who goes home after last week’s performances…and the votes are in. It came down to Terrell Owen & Cheryl Burke and Barbara Corcoran & Kep Motsepe. And, sadly, 68-year-old Corcoran had to bid adieu to the ballroom tonight.

She kept us entertained by blatantly flirting with her partner, and really did an awesome job in Week 2. Unfortunately, her best performance so far doesn’t quite make the cut. While Corcoran thanked DWTS for the opportunity, Tom Bergeron commented that he’d love to see her have a dance-off with Charo. Yes, please!

After Corocoran and Motsepe’s elimination, here’s what the scoreboard looks like so far in Week 2.

Don’t miss another elimination on tonight’s (September 26) Dancing with the Stars at 9:00 p.m. EST on ABC.