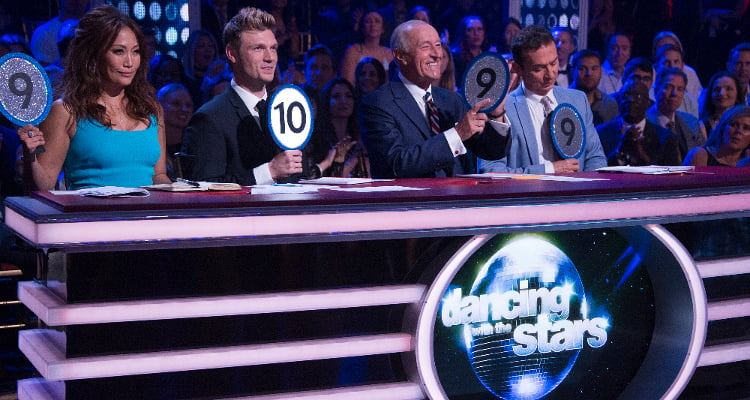 Have you recovered from the shocking Dancing with the Stars elimination from last week? No one could predict Heather Morris would get eliminated this early! Well, now it’s time for one more celebrity to leave the ballroom. Oops! Correction; More than one celebrity! DWTS is changing it up this week with a dance-off. In Week 7, the celeb-pro pairs will take you to Movie Night. Here’s who’s left on the Dancing with the Stars cast. So, prepare yourself for another heartbreaking elimination!

Last week, DWTS took a trip down the memories of former teens everywhere with the Boy Bands vs. Girl Groups Night. But no one expected Heather Morris and Nancy Kerrigan to be at the bottom. Nothing prepared us to see Morris, an early frontrunner, go home the same night she got the first perfect score of the season. And it was the first night her partner; Maks Chmerkovskiy returned after sitting out for four weeks due to an injury. Their elimination was a shocker, but it goes to show just how intense the competition is.

The remaining teams are probably feeling the pressure now. Tonight, DWTS Week 7 will celebrate the movies. The celebs and their pro-partners will have to capture the essence of one specific movie. What will we see? Romance, horror, western, silent? Can’t wait!

This week, two teams will be eliminated from the ballroom. Yes, another elimination shocker! The couple with the highest judges score of the night will have immunity from the impending dance-off later on in the show. And here we are still reeling over #TeamMaksimumHeat’s elimination!

The show’s resident choreographer (and the woman behind Emma Stone and Ryan Gosling’s moves in La La Land), Mandy Moore, will be joining the judging panel. While the nature of the dance-off is still a mystery, the stars are stepping up their game for a night at the movies. Below is a list of the dance styles and song choices each team will perform tonight.

Before Heather and Erika Jayne were eliminated, we thought it was easy to predict who would be going home on DWTS. The ladies —Erika, Heather, Nancy, Simone, and Normani— were clear frontrunners. Many had even written off the boys with only Rashad Jennings being a potential winner of the Mirrorball Trophy. But the women have been in the bottom more than once.

Almost all of them continue to go back and forth on the leaderboard, making it difficult to predict who is a frontrunner at this point. Going by last week’s score, Nick Viall is at the bottom of the leaderboard and is in danger of going home (something DWTS fans believe should have happened last week). David Ross is above Nick by one point. Frankly, no one can tell how far he’ll go given his popularity and how entertaining it is to watch his two left feet. Bonner Bolton is still struggling to give a mind-blowing performance, though he’s not been completely written off.

As for the dance-off, we don’t know who it could be. But we’ll be looking forward to it. Which team do you think will win the immunity from the dance-off?