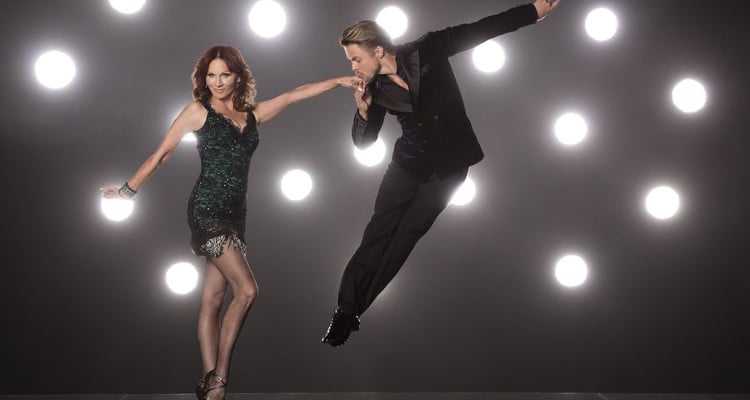 Dancing With the Stars had it’s most brutal elimination this season with two dancing pairs being eliminated in tonight’s episode. But, it was not all sad news, considering pro-dancers Emma Slater and Sasha Farber got engaged last night, and on live television no less! The joyful moment aside, lets take a look at the Dancing With the Stars contestants who will live to dance another week and who got eliminated on the show last night.

In this season’s first, two couples were eliminated. The first couple to be eliminated was Kenny ‘Babyface’ Edmonds and his pro-partner, Allison Holker. He had started off the season strong, but his weak performance last week cost him, especially when everyone has been seriously stepping up their game, performance after performance. But the man took it with class and thanked everyone on the show. The second pair to be eliminated was Robert Van Winkle a.k.a. Vanilla Ice and his partner, Witney Carson. Vanilla Ice had been getting consistently decent scores, but it just goes to show that it’s not enough to be in the middle, when everyone is aiming for the top of the leaderboard.

Thank you to everyone for the support & my amazing partner @AllisonHolker for guiding me on this journey! It was fun #DWTS #TeamHolkerface pic.twitter.com/tL5OOzdjf5

Who Are the Remaining Contestants?

Nine couples still remain to dance another week. After tonight’s episode, here’s what the leaderboard looks like.

Laurie and Valentin have consistently been one of the top scorers. So, it’s no surprise that they got the first perfect score of DWTS season 23. Olympic swimmer, Ryan Lochte, and actress-author, Marilu still haven’t been able to come out of the bottom ranks. What made this episode even better were the stellar guest performers of the night! Joe Jonas’ took the DWTS stage with his band, DNCE and the male pros, Maks, Val, Artem and Gleb also performed. Also proving how impressive he can be was new judge, Julianne Hough’s brother, Derek. He went shirtless, drummed and danced. What more can one ask?

Reality TV engagements aren’t uncommon on ABC. This time, though, we think it will last. Pro-dancer, Sasha Farber popped the question to his long-time love and fellow pro-dancer, Emma Slater. The couple had taken to the stage to deliver a steamy performance with their chemistry. After the performance, DWTS host, Tom Bergeron said he thinks Sasha would make a good host and he let him take over the show for the night. Here we were thinking Sasha was going to channel his inner Bergeron. Instead, we got to hear some sweet romantic words from the dancer. He professed, “Baby, I’ve wanted to do this for such a long time. I love you so, so much,” and presented Emma with the ring! Of course, she said yes! And in the shower of confetti, the couple was congratulated by the ecstatic DWTS family. Congratulations to the wonderful couple!

She said yes! Congratulations to our pros Emma and Sasha! #DWTS pic.twitter.com/0dgGxmg1Lc

Dancing With The Stars airs every Monday night, at 8:00 p.m. EST on ABC.