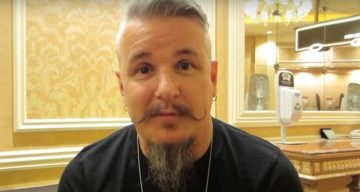 Dana Loesch and Floridians gathered at CNN’s town hall to debate guns on February 21, 2018. Since the debate, people want to know more about the NRA spokeswoman and her personal life. So, we’ve compiled everything you need to know about Dana Loesch’s husband, Chris Loesch.

Now, people want to know more about the speakers on the panel, and much interest has gone to Dana Loesch. Her husband is a politically outspoken figure, too.

Find out all about Dana Loesch’s husband with details from Chris Loesch’s wiki.

Chris Loesch’s persona screams rockstar—and rightfully so! He has been a touring musician and singer-songwriter for the better part of his career.

Loesch graduated from Jefferson College in 1994, where he majored in music and acquired a certification in nursing. He was a production manager for St. Louis Magazine in the early 2000s.

The rocker’s love for the visuals in a performance led him to pursue computer graphics. He put his performing days behind him, and before long, was an in-demand graphic artist in the publishing business.

Although he’s big in graphic design, Loesch couldn’t leave music completely. So, he got together with his friend, Doug Firley, to set up Shock City Studios.

After 2014, Loesch left Shock City to start his own studio, Intuation Studios LLC, in Dallas.

I did get a picture with @dloesch this year at #ShotShow2018 thanks to @chad_from_kel_tec ! I’m like a lamp with a genie in it.

Besides his own music and graphic art business, Chris Loesch manages his wife’s schedules. Dana Loesch is active with her political commentary, radio show, and appearing on news broadcasts. And Loesch helps his wife coordinate everything.

Interestingly, when a then 22-year-old Dana Loesch married her husband, politics was a matter of contention between them. She dated the musician, who is seven years her senior, for three months before they got each other’s first initials tattooed on their ring fingers and took their vows!

Back then, Dana Loesch was raised as a Democrat, while her husband was Republican. But she didn’t care about their political leanings back then. However, they still had fierce political debates.

Dana and Chris Loesch are parents to two boys. Six months after the birth of their first child, Liam, 9/11 happened.

Loesch said that the 2001 attacks were the “deal sealer” for his wife, who started churning out her political opinions in blogs. He pushed her to be more outspoken about her views, which then led to her radio show.

He’s a Supporter of Gun Rights

Chris Loesch, age 46, is an avid hunter and a strong supporter of gun rights. He shines the light on the “positive aspects of the gun industry,” according to an interview.

Chris and Dana Loesch don’t talk about the guns they own, but he once mentioned his famous makes and models. He said that he owns “something from everybody.”

The couple has homeschooled their children and reportedly don’t have medical assurance. They stick to a budget to run their household.

Standing there in front of the thousands who were up in arms about the Florida shooting, Dana Loesch held her own as the representative for the NRA. And though she tip-toed around certain issues raised by those who lost loved ones, it seems the majority rolled their eyes calling “B.S.”

Either way, it doesn’t look like Dana or Chris Loesch is giving up their guns anytime soon. Check out an interview with Chris and his passion for guns below: