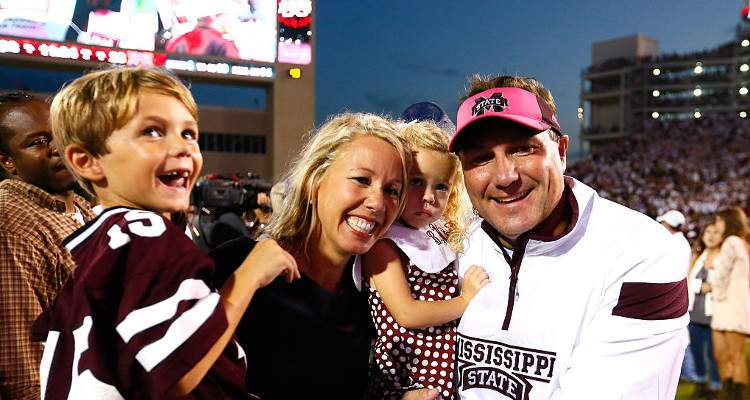 Ever since Dan Mullen signed on as the new head coach of the Florida Gators, the spotlight has fallen squarely on his wife, Megan Mullen. She was an accomplished golf player before football caught her attention. Today, she is a part of her husband’s entire training program and referred to by many as “Mama Mullen” because of the maternal interest she has for her husband’s team. Even though most wives of coaches tend to take a backseat to their husbands, Megan is a notable exception. Mama Mullen is an integral part of the cultural shift Dan intends to bring to the Gators team. Although her pre-game ritual of giving every Gator player a good luck kiss has raised a few eyebrows. Nonetheless, she’s making it a point to prove she’s a surrogate mom to her husband’s talented team of young footballers as you’ll see in our Megan Mullen wiki.

Megan Mullen was an athlete during her high school days. After graduating, she enrolled at Ohio University and obtained a graduate degree majoring in broadcast journalism, with a minor in sports and political science.

She needed an internship and, based on her stepfather’s advice, she applied to four places, and surprisingly got through all of them. Her parents said, “Go where the people are best to you.” She thought about it and decided to work for CNN Sports Illustrated in Atlanta, Georgia, and it completely changed her life. CNN offered her a job, but Mullen returned to Ohio University to complete her degree.

Mullen Was a Golf Player

Even though she is most closely associated with football these days, she started off with a passion for golf. According to reports, her father owned a golf course while growing up in Butler, Pennsylvania, and she captained her high school golf team.

After graduating, Mullen submitted demo tapes all over the South, East, and Mid-Atlantic States in search of a good job. She got a job in Maryland and signed a two-year contract. In 2002, she became a weekend sports anchor at WNWO-TV in Toledo, Ohio, becoming the first woman to hold this position.

Mullen still has a soft spot for golf and starred in the promotional video for the Reynolds Plantation, which offers golf and tennis to its members.

Mullen later moved to Salt Lake City, Utah to become the main sports anchor at a Fox affiliate but had to move soon after getting married to Dan Mullen. He got the coach’s job in Florida, when the couple got married on July 4, 2005.

Though Megan Mullen is busy with work most of the time, she takes out time to spend with her family. She has two children with Dan; Canon and Breelyn Elisabeth.

She says that her favorite time is splashing in the swimming pool and hanging out with her family, “When Dan has time, we sit out in the back with the babes, the dog, and enjoy the pool.”

Mullen also has a fabulous relationship with her mother and said, “She taught me everything in the world. Other than Dan, she is my best friend. I talk to her at least once a day. She probably taught me best how to be a wonderful wife and mom, for sure.”

Fans who want to see Megan Mullen’s hot pics will be disappointed as there are hardly any photos of her online. It seems that she is a very private person with very little time to spare. She spends a lot of time making things comfortable for her family, especially her husband who, according to her, “is as kind and loving after a loss as he is with the wins. You get him home and get him relaxed on the couch, and relax him as much as you can. You get him to just watch TV and divert him away from it awhile.” Just make everything as normal as possible.” Now, Mullen is looking forward to the future as her husband starts his new job as the head coach of the Florida Gators!