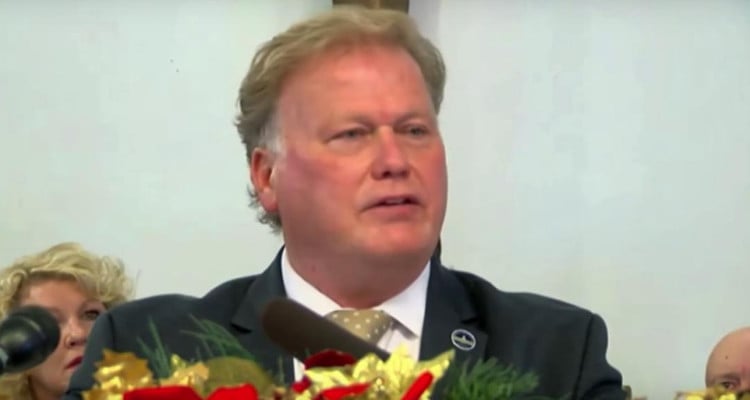 Rep. Dan Johnson from Louisville, Kentucky, was accused of sexually assaulting a teenage girl. After denying the claims, the Kentucky lawmaker reportedly killed himself.

Dan Johnson, a member of the Kentucky House of Representatives, defiantly denied allegations of sexual assault. A day after refuting the accusations, the embattled lawmaker died of apparent suicide on Wednesday (December 13). Johnson allegedly molested his teenage daughter’s friend in 2012. Find out all about the accusations against him and his death, right here in our Dan Johnson’s wiki.

He Was a Pastor

Dan R. Johnson was an evangelical pastor aside from working in politics. Johnson was a bishop at the Heart of Fire Church, a nondenominational, evangelical church in Louisville, Kentucky. According to Dan Johnson’s Facebook, he referred to himself as the “Pope” of this church.

His church is sort of unorthodox and is dubbed as a “biker church,” as a large percentage of the congregation is from a biker bar. There’s a YouTube video of their unusual “gun choir” that performs with firearms.

The video describes their church by saying, “If you’re a tattooed, sunburnt gun-toting, leather-wearing biker that might get kicked out of a regular church, you’re definitely welcome at Heart of Fire. There’s lots of music and fellowship and Johnson’s fiery and passionate sermons will light a fire in your heart.”

An exposé by the Kentucky Center for Investigative Reporting on the pastor about his alleged improprieties states that Johnson gave varying details about his education. He claimed to have a doctorate in theology. He said under oath that he holds a “doctorate of divinity” from a Bible school in Des Moines, Iowa. The school confirmed that Johnson studied there but didn’t acquire a degree.

He Had Controversial Comments

Johnson won a seat in the state House in 2016, defeating Democratic incumbent Linda Belcher by a narrow margin. He was part of a wave of Republican victory in the state that had historically voted Democratic.

During his campaign, Johnson was known to write insensitive posts on Facebook, including comments against Belcher and Islam. The Republican and Trump supporter made inflammatory posts against Barack and Michelle Obama, comparing them to monkeys. Some of his racist rhetoric even prompted Republican leadership to call on him to drop out of the election.

Besides writing several posts in favor of President Trump, Johnson’s Facebook also showed his pro-life and pro-gun leanings. He stood out for mixing guns and religion. And, he sponsored bills on religious liberty and teaching the Bible in public schools.

He Was Accused by His Daughter’s Friend

The 57-year-old was married to Rebecca Johnson, and they have five children.

One of their daughters, Sarah Johnson, brought her friend, Maranda Richmond, for a sleepover at their house in 2012. Richmond, now 21, was friends with Johnson’s daughter since her father liked going to Heart of Fire church.

Richmond alleged that Johnson groped and sexually assaulted her in the basement of his home when she was 17. She approached the police who investigated but didn’t file charges.

Dan Johnson’s wife refuted the claims made by Richmond. He vehemently denied the sexual assault accusations at a press conference held from the pulpit of his church on December 12.

“This allegation concerning this lady, this young girl, absolutely has no merit, these are unfounded accusations, totally,” Johnson said.

The Kentucky Rep added that the accusations were made up as part of a nationwide strategy to defeat Republican conservatives. However, even his side of the aisle didn’t appear to support him.

Both Republicans and Democrats demanded his resignation after the report. However, at the conference, he refused to resign over the allegations.

The Kentuky Lawmaker Kills Himself

On Wednesday, the politician posted a Facebook message (now deleted) once again denying the accusations by Richmond made in the investigative report. He then asked people to take care of his wife, children, and grandchildren.

Johnson’s cryptic message concluded with, “IT Has Won This Life . BUT HEAVEN IS MY HOME. ‘PLEASE LISTEN CLOSELY, Only Three things I ask of you to do,if you love me is (1)blame no person,Satan is the accuser, so blame the Devil himself. (2) Forgive and Love everyone especially yourself .(3)most importantly LOVE GOD. P.S. I LOVE MY FRIENDS YOU ARE FAMILY ! GOD LOVES ALL PEOPLE NO MATTER WHAT ! [sic]”

Dan Johnson’s PTSD, which allegedly resulted from the 9/11 attacks, was also mentioned in his post.

The post read like a suicide note to a few people. So, a concerned follower informed authorities, according to reports.

Police tracked his cell phone which led them to Johnson’s lifeless body. He died of a single gunshot wound on Greenwell Ford Road in Mount Washington, Kentucky.

According to authorities, Johnson stopped his car at the end of a bridge in a secluded area. He got out and walked to the front of the car, where he then reportedly shot himself. The autopsy is still pending, but the police have called it a “probable suicide.”

Michael Skoler, the president of Louisville Public Media, which owns the Kentucky Center for Investigative Reporting, said everybody at the publication was “deeply sad.” However, he reiterated that in their effort to provide the public with all the facts, they contacted Rep Johnson but in vain.