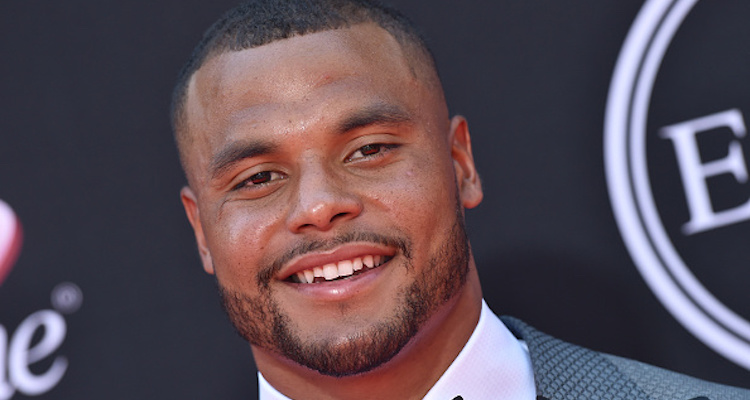 Current Dallas Cowboys quarterback and star player, Dak Prescott has been linked to quite a few stunningly beautiful women throughout his short career. Not surprisingly, he’s even been linked to a few Internet-famous models in the past few months of which fans have been extremely critical.

Since he and his ex-girlfriend, Kayla Puzas, ended their two-year relationship in 2015, there have been a lot of rumours and controversy surrounding who Dak Prescott is currently dating. Dak is a beloved and talented football player who’s proven his prowess on and off the field; so naturally, fans are worried about the 23-year-old star athlete being involved in potentially toxic relationships. Even his fellow teammates and NFL officials have expressed serious concerns about certain women Dak has been linked to. It’s a little unclear who Dak Prescott’s girlfriend is in 2017, but it’s worth talking about some of the drama circulating about the famous young athlete.

Who Is Dak Prescott’s Current Girlfriend?

If Dak Prescott’s dating timeline is any indication, then his off-field game is almost as impressive as his on-field game. Just look at this picture of his first serious girlfriend, Kayla! She may not be a professional model, but she could definitely become one if she really wanted to!

Unfortunately, after dating for two years, they decided to call it quits. It’s likely that they were simply headed in different directions. Whatever the reason, it’s a shame because they made a beautiful couple!

Following their breakup, the drama began for Dak. Rumours of a fling with former Playboy Playmate, Dallas Nicole Parks began to surface and things got really weird, really fast. While some websites have reported in the past that the two were an item for many months in 2016, and there’s some photographic evidence that they at least met one another, rumours of their romance have largely remained unsubstantiated. In a September 2016 tweet, Dak denied the rumours altogether:

Funny Fact: Linked to a Girl Named Dallas that I Don’t Even Know just bc I play for Dallas ???? lol “come on man”(MNF Voice)

She was also linked to free agent quarterback, Johnny Manziel. There are pictures of her with both football players circulating the Internet that have since been deleted from her Instagram and she’s shown up at several Dallas Cowboys games, but she also seems to show allegiance to other NFL teams all over her Instagram.

During that game, she tweeted her support for Dak: “I love it when @dak runs for it #dakattack”

A supportive tweet for one of her favourite teams doesn’t necessarily indicate that they were dating at the time, but by that point, the rumour mill was already abuzz. Later that same night, she released a series of potentially defamatory tweets that called Dak’s character and his public persona as a humble and kind person into question. She claimed that Dak was only pretending to be modest about all of the attention and praise he was receiving. The next day, she backtracked her original remarks and claimed that someone hacked into her Twitter account and posted those messages. Shortly afterwards, she admitted that she was, indeed, the one who posted those heinous tweets, though it’s unknown why she would do that.

It suffices to say that Dak’s affiliation with Dallas quickly dissolved after this incident and he seems to have moved on to much better prospects.

At this point, you’re probably wondering who Dak is dating now or if he’s decided to take a break from dating altogether. He’s recently been spotted out and about with fitness advocate, model, and active wear mogul, Michelle Game. There’s a certain photo of the two of them hanging out together that’s sparked the speculation that they might be dating, but so far neither of them have confirmed these rumours. Who knows? Maybe Dak Prescott’s list of girlfriends will continue to grow as his career advances.

“The most important thing is to enjoy your life—to be happy—it’s all that matters.” – Audrey Hepburn