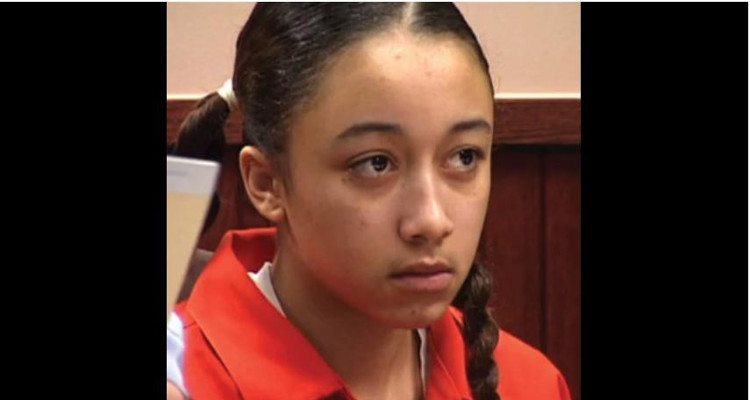 Cyntoia Brown’s story is more heartbreaking than any you’ve heard before. A 16-year-old who was forced into prostitution and was afraid for her life is now in prison. She killed the man who paid her for forceful sex to protect herself from his guns, and the justice system failed to protect her. But now, people have come together to help Brown with her case. Here’s what happened.

Brown was just a teenager when a pimp named “Kut Throat” forced himself on her and later pushed her into the dark alley of prostitution. Brown was a runaway and had a bad childhood. She did something she didn’t want to do, and when she found the chance to save herself, she was locked away forever.

Cyntoia Brown now has been in prison for 13 years. Keep reading to know more about her story.

Cyntoia Brown was born on January 29, 1988, which makes her 29 years old. She was born to Georgina Mitchell, who was a hopeless mother and an alcoholic. Mitchell had gone to Clarksville, Tennessee, to live with her sister and they were neighbors to Ellenette Brown, who was a teacher.

According to some reports, Mitchell had befriended Brown’s son, John Harleston. She, herself, was a 16-year-old when she began opening up to Brown about her family’s mental illness issues.

Mitchell became a call girl and began having sexual relations for money, along with drinking at nights. She got pregnant and continued drinking and doing drugs, which severely affected the fetus. However, she hid her pregnancy and her job from Brown and the others.

Later, when Mitchell was at the hospital, Harleston called to tell his mother about it, but Brown was unaware of a baby. She was shocked to find out that Mitchell had gone to the hospital to deliver a child. When the mother and son reached the hospital, they found Mitchell with a baby girl in her arms, who she had already named Cyntoia.

The baby was born with fetal alcohol spectrum disorder, and her father was not present at the hospital. Nonetheless, Brown wanted to do more for Mitchell and her baby, but the young mother had taken the child without informing anyone of her whereabouts.

Six months later, Brown found Mitchell and the baby on her footsteps. The mother was desperate to leave her baby with Brown for a while to be taken care of. So, Brown began taking care of the baby like it was her own daughter while Mitchell had vanished for months.

A year later, Mitchell returned to Clarksville and asked for her daughter. But Harleston was against it because he knew she was a prostitute and had made some trips to prison, as well.

Brown made sure papers of guardianship were prepared, which stated that the baby was legally under her care. However, Brown’s husband, who was in the Army and a Vietnam combat veteran, did not like the idea of somebody else’s child growing up in his home. So, he would usually take it out on Cyntoia Brown and would harangue her about how she would turn out to be exactly like her mother.

Later, Cyntoia Brown admitted in a statement that she was abused and raped by her father when she was a child.

A Truth Revealed Too Soon

Cyntoia Brown grew up, and once she had an understanding of things, she began doubting that she was adopted. She would rarely ask about her birth mother, but she began developing a dark side. She was arrested for robbery when she was in seventh grade, after which she was allegedly put into an alternative school for at-risk children.

Brown’s life soon took a drastic turn, and she began doing drugs and drinking alcohol. The all too familiar situation repeated itself, and before she knew it, a boy she was dating, forced her into prostitution. She had run away from her home, and now without any protection, came into the clutches of Kut Throat.

“He would explain to me that some people were born whores, and that I was one, and I was a slut, and nobody’d want me but him, and the best thing I could do was just learn to be a good whore,” Brown had testified.

How Did She Kill Johnny Allen?

In 2004, Brown was picked up by a real estate agent named Johnny Allen who was 43. He drove his truck to his home, fed Brown, and then slept with her.

Allen’s home showcased a collection of guns, and red flags went up in Brown’s head. Once Allen was done with her, he reached under his bed for a gun (or that’s what Brown thought), and all she could think was he was going to kill her.

In the spur of the moment, Brown pulled out a gun herself, and shot him in the back, killing Allen. She fled the scene with Allen’s two guns and some money, in his truck.

Although Brown was 16 at the time of the murder, she was tried as an adult. The court found her guilty of first-degree murder and sentenced her to 51 years in prison with a chance of parole when she turns 67.

Cyntoia Brown’s documentary is what sparked the news about her story. She was a forgotten inmate when Me Facing Life: Cyntoia’s Story came out in 2011, when she was 23.

The film was produced by Daniel H. Birman and it covers all the details about Cyntoia Brown’s case. While prosecutors believed her motive to kill Allen was robbery, Brown’s statement about self-defense was of no help.

Brown had explained that he reached out for his gun, but according to evidence, he was allegedly asleep at the time she fired the shot. She slept with him, took the money and guns, and had left the room, but returned to shoot him and kill him, is what the prosecutors liked to believe.

The film focuses on these harsh sentences given to teens, and why the justice system should take a different call on such incidences and victims of crime.

Cyntoia Brown, in 2017, is still serving time at the Tennessee Prison for Women. She has already served 13 years, and many bills were passed regarding the reduction of sentences for juveniles, but they didn’t apply to Brown. Lawyers are still doing their best to reduce her time in jail and restore faith in the justice system.

#IMSOMAJAH ???? craziest story I’ve heard in a long while if you don’t know do the research #cyntoiabrown i stumbled across this story a couple years ago glad it’s getting light now give it justice!!!

Kim Kardashian took to social media, to explain how disappointed she was with the justice system. Once she knew about Cyntoia Brown’s story, she was heartbroken.

“I’ve called my attorneys yesterday to see what can be done to fix this,” said Kardashian West on November 21, 2017.

Songstress Rihanna was also in on the news and shared the post with a #freecyntoiabrown caption.

“Something is horribly wrong when the system enables these rapists and the victim is thrown away for life,” Rihanna wrote.

Other stars like Cara Delevigne have also utilized their popularity to spread the news among people to help Cyntoia Brown with her sentence.

The system has failed. It’s heart breaking to see a young girl sex trafficked then when she has the courage to fight back is jailed for life! We have to do better & do what’s right. I’ve called my attorneys yesterday to see what can be done to fix this. #FreeCyntoiaBrown pic.twitter.com/73y26mLp7u