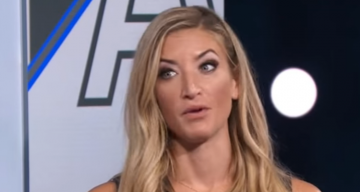 Cynthia Frelund is a well-known name in the NFL network, giving viewers her opinion and unique insight about the game. Here is everything you need to know about Cynthia Frelund.

The 2017 NFL season will start on September 7, 2017 and teams are already prepping for the fall. Analysts and fans, including Cynthia Frelund, are going through the new rosters and already making predictions about what the new season will bring. Here is everything you need to know about the gorgeous Cynthia Frelund.

#tbt to 4am sandwiches. Is it weird to already miss GameDay Morning? Thank you for the great work @amydlrcoopmakeup and of course @alley_inwonderland for yours too! #chrissy

Cynthia Frelund was born on August 24, 1979, in Okemos, Michigan. This makes Cynthia Frelund’s age 37 years old. Growing up, she spent most of her childhood in Okemos, graduating from Okemos High School in 2001, before going on to Boston College for her Bachelor of Science. Cynthia then went on to Norhwestern University for her MBA in Predictive Analytics.

Also Read: Russell Wilson Net Worth: How Much is the NFL Quarterback Worth?

In 2005, Cynthia started her career as a Senior Analyst at Fusion, where she worked for three years. From there, she started working for the NFL, looking after finance and strategy for less than a year before leaving. Additionally, for five years, she worked at Equinox as a certified Pilates and group fitness instructor.

Cynthia also has experience in business development with the Disney-ABC Television Group. There, she worked with several sports channels like ESPN and NFL. She worked with ESPN in 2012 as a producer and Next Generation Content Strategist. Cynthia is a self-taught coder who, while working at ESPN, used machine learning and algorithms to come up with strategy during the daily fantasy matchups. She left ESPN in 2016 and is currently working with the NFL as an Analytics Expert.

with working for the NFL, she has made appearances in different shows and platforms to offer statistical and detailed analyses about NFL players and ongoing trends within the game. Cynthia Frelund makes regular appearances on shows like NFL GameDay Morning, NFL Fantasy Live and the NFL Network’s coverage of the Super Bowl.

Regarding the NFL Network’s newest addition, NFL Media’s Executive Producer of Original Content, Michael Mandt said, “Cynthia will break down complicated data and statistics, recognize patterns and trends, and then translate it in a way that is easy for fans to digest and understand.” He further added, “She is a great addition and makes fans smarter, fantasy owners better and does so in a way that no other football analyst does.”

Also Read: Tom Brady’s Net Worth: How Rich is the NFL Quarterback?

Cynthia has Participated in 20 Marathons

Besides her thriving career, Cynthia completed 20 marathons in 20 states, with a goal to complete a marathon in every state. She is also involved with Bright Pink, a national non-profit organization that helps to prevent and work on early detection of breast and ovarian cancer in young women.

This is what happens when most of your friends live in SF and you bet the #cavs win 1 of the first 2 at the Oracle. Ridiculous #selfie is a funny bet. But only bc they let me have professional makeup and hair styling. I need the Cavs not to get swept… Please. #nbafinals2016