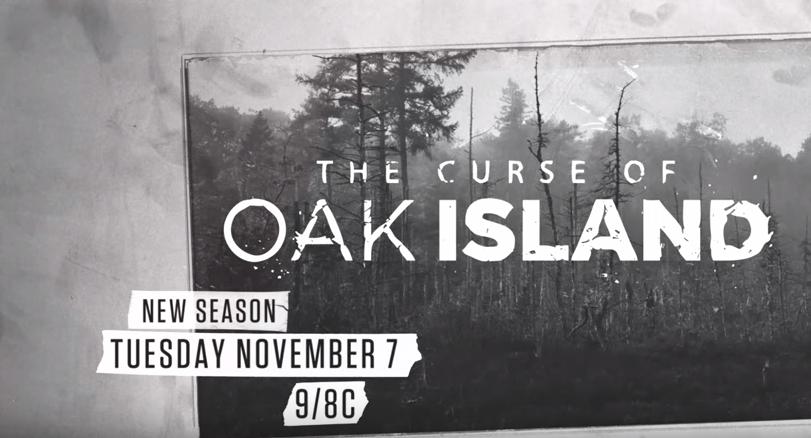 For a mystery-adventure laced with historical treasures and conspiracies, History Channel’s The Curse of Oak Island is a must see series. If you love learning about treasures and the prophesies surrounding them, then this show is definitely for you. Read on to learn more about the curse and treasure on Oak Island.

What is the curse of Oak Island that has kept explorers searching for generations? People go to the island looking for the truth behind the theories. With speculation that the treasures include Marie Antoinette’s jewels, William Shakespeare’s manuscripts, and even religious artifacts, there is only one way to know for sure. Is the curse of Oak Island real? Find out more about it, right here.

What is Buried in Oak Island?

The Curse of Oak Island premiered back in 2014. The island in Nova Scotia is said to be riddled with worldly treasures, with ciphers found after excavations in early 1800. It all began when McGinnis, Oak Island’s first settler, searched for a piece of land and allegedly spotted a depression in the ground.

At the time, stories of buried treasure and historical artifacts were spinning, and folks believed that there was a great deal of money on the island. McGinnis thought of a story which spoke of millions in treasure being buried, and believed that he found the location.

Though it was later said that three boys found the depression, it was initially believed that McGinnis and two other adults spotted the site, and began the first excavation in 1856.

Theories about what is on the island are numerous. When the French Revolution began, it was suggested that Marie Antoinette asked her maid to flee with her jewels, and possibly more important artifacts, after angry Parisian working women revolted and marched at the Palace of Versailles. The maid is said to have carried the fortune in her luggage to London, and upon arriving in Nova Scotia, had the French Navy bury the treasure in Oak Island.

Looking for The Curse of Oak Island Box Set? Buy it here!

Another theory involves Francis Bacon, the assumed author of Shakespeare’s works, and says that Oak Island was to be his safe haven. Penn Leary, the author of The Second Cryptographic Shakespeare, claims that there are small clues in Shakespeare’s work that prove Bacon was the true author, and believed that pit was made to keep the manuscripts hidden.

There were, and continue to be, many excavations on the island. People found feet of clay, stones, and even coconut fiber in the pit that housed a number of sinkholes and possible booby traps with rotten logs. It was also flooded with seawater.

The Lagina brothers saw an article in Reader’s Digest about the treasure in Oak Island in 1965. They have since been working on finding the treasure.

They use modern machinery and technology that could help them discover something others couldn’t. Since season 1, the duo has dug up the earth on the infamous island using drillers, water pressure pumps, and machines to drain the water from the pit.

Borehole 10X… What mysteries lie in its depths? At 181 feet deep, with an underground cavern at the bottom, cameras have shown the possibility of wooden chests, tools, large wooden posts, and perhaps even a human body at the bottom of 10X. Just like the elusive "Money Pit", the borehole is flooded with water. Recent sonar scans and dives have left the Lagina brothers and their partners empty-handed in their search for the Oak Island treasure. ?✖️ . . . #oakisland #walkthemystery #curseofoakisland #borehole10x #10x #diggingfortreasure #thesearchcontinues #historychannel #southshore #lunenburgcounty #mahonebay #chester #novascotia #canada #ricklagina #danblankenship #visitnovascotia #thisiswhereilive

They discovered man-made tunnels, and more clues as to what could be hidden inside. The secrets being uncovered are enough to make fans of the show eager to see what they find next! Could this really be where all those historic treasures are hidden?

The show is currently in its fifth season on the History Channel. There is even more adventure to see as The Curse of Oak Island airs a new episode every Tuesday night at 9:00 p.m. EST.