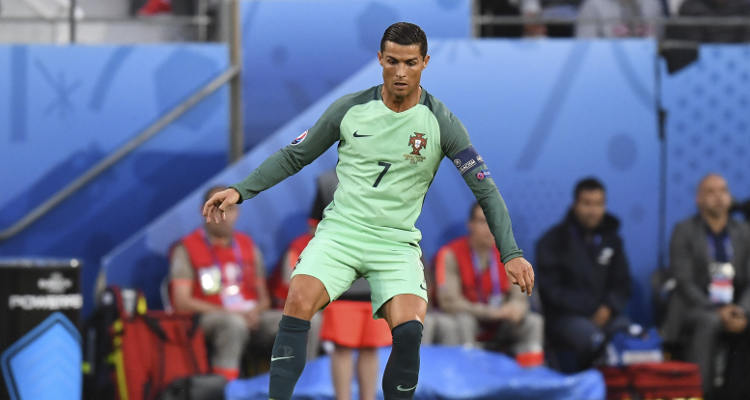 In the U.S., usually think of baseball and football stars when it comes to highly paid athletes in team sports, but “traditional football”—that’s soccer on this side of the ocean—is where the real money is. Just look at pro player Cristiano Ronaldo’s net worth of $79.6 million, making him the third highest-paid athlete of 2015, behind only boxers Floyd Mayweather, Jr. and Manny Pacquiao. And he may have been ranked even higher had those two not met in the ring last year.

Formerly of Manchester United and currently playing for Spain’s Real Madrid as well as Portugal’s national team, Cristiano Ronaldo is considered by many as the best player in the world today, if not ever. The winner of numerous awards, including FIFA World Player of the Year and World Soccer Player of the Year, and champion in the likes of the Premiere League and FIFA Club World Cup, Ronaldo has scored over 500 goals in addition to his other impressive stats. He’s also his home country of Portugal’s highest goal scorer of all time.

Boasting a versatile play style with a strong focus on offense, Cristiano Ronaldo is noted for being especially skilled with positioning, reactions, and technical skill. Outside of his incredibly successful and lucrative football career, he is also notable for his philanthropic efforts and love of fashion, holding several sponsorships, opening several boutiques, and even designing his own lines.

Cristiano Ronaldo dos Santos Aveiro was born February 5, 1985 in Santo António, located on the island Madeira in the Portuguese archipelago. Living in poverty, he began playing football after being expelled from school for attacking a teacher, his mother then telling him to focus all his attention on the sport. He started playing for an amateur team at age eight, joining a local club at age 10 that went on to win the title, leading to him being signed by Sporting Clube de Portugal for an undisclosed amount.

Showing great skill with Sporting CP (and overcoming a heart condition that could have kept him from continuing to play), Cristiano Ronaldo was scouted by Manchester United in April 2013 for UK12.24 million, making him the club’s first Portuguese player and the 100,000th person to join the team. He ended his first season scoring the opening and winning goal in the team’s FA Cup Final victory. He continued to enjoy success with the team, including leading them to victory in the 2008 UEFA Champions League.

In May 2008, reports began to spread that Real Madrid was attempting to sway Cristiano Ronaldo away from Manchester United. He would stay with the team for one more year, though only after heavy disputes regarding whether he could play somewhere else or not. Finally, in June 2009, Manchester United accepted Real Madrid’s offer for Ronaldo of £80 million (US$111 million, based on current currency rates), playing his first game for his new team the following month. His contract was for €11 million (approximately US$12 million) with a €1 billion (US$1.1 billion) buyout clause.

Needless to say, Cristiano Ronaldo has only continued to break records and win games during his time as a member of Real Madrid. Most recently in September 2015, he became the all-time highest goal scorer in the history of the Champion’s League, also scoring his 500th career goal later that same month. His newest record came in December 2015, when he became the first player to score double figures in the group stage of the Champions League with 11 goals.

Besides his unparalleled football career, Cristiano Ronaldo also has some business ventures on the side.  Of course, as one of the greatest athletes playing today, he enjoys numerous sponsorship and endorsement deals, including the likes of Nike, Coca-Cola, Kentucky Fried Chicken, Samsung, and Castrol. He is estimated to make about $28 million from these endorsements. Ronaldo also takes fashion very seriously and is the spokesperson for many brands, fashion and fragrance lines, and designers. He currently has two fashion boutiques called CR7 (his initials and jersey number), both in Portugal, and released an underwear and sock line in late 2013. He released his debut fragrance, an aftershave called Legacy, in September of 2015. Furthermore, he’s one of the celebrity ambassadors for TAG Heuer—the luxury watch company actually released a special-edition timepiece, the TAG Heuer Formula 1 CR7, in honor of the soccer legend.

*All amounts in USD