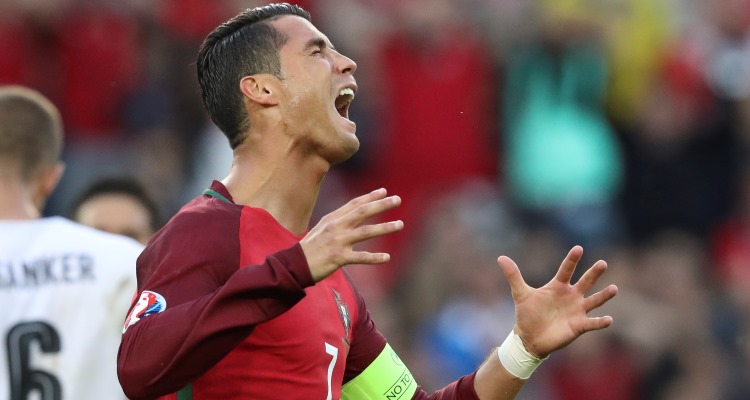 The Euro 2016 final (which occurred on Sunday) was by far one of the biggest games of star player, Cristiano Ronaldo’s career. He not only lead the Portugal national team to victory, but he settled many disputes regarding whether he was a better player than Lionel Messi. But while his team did indeed win, they largely did it without him, as a collision with France ace Dimitri Payet caused Ronaldo to leave the game early due to injury. While he can take solace in his team’s win, the player is now the dubbed in Euro 2016 memes as “Crying Ronaldo” for his sad reaction to being removed from the game—and a random moth didn’t help things much. Check out some of the top Cristiano Ronaldo memes and images from Twitter and the rest of the ‘net below.

The memes of Cristiano Ronaldo 2016 are not only making fun of the star crying over his injury, but of the innocent moth that landed on his face while he was lying there. The moth has become a star itself for its perfect timing, with numerous “Cristiano Moth” Twitter accounts popping up almost immediately. At least one of these accounts decided to take an artistic approach with what happened, and when they say that less is more, it can apply to art as well.

…and the winners are @Cristiano and the moth! What a tournament! ⚽️???? #Euro2016Final #ronaldosmoth pic.twitter.com/DDyLYifUek

All Hail the Moth

This is kind of a similar image, but too much detail was put into it not to share. If there’s a victory in Portugal this week, hopefully they’ll give Ronaldo a moth-themed float to ride around the city on. Or maybe a giant moth balloon like you’d see in a Macy’s Thanksgiving Day parade? Why, the moth could be Portugal’s national animal by the end of the week!

At least one fan had the sense to combine two trending topics: funny Cristiano Ronaldo photos and the hit new Pokémon Go app. The game, which lets you catch virtual Pokémon in the real world, is not yet launched in all countries but has already taken the world by storm, much like the Euro 2016 tournament did. Venomoth would’ve been a better choice for this pic than Butterfree, but we definitely won’t argue that getting hit by a Poké Ball would cause anybody to tear up!

If it makes Ronaldo feel any better, it hasn’t been a great time lately for Lionel Messi, either. That’s because not only did Argentina lose its match to Chile in the Copa America final (which happened during the Euro 2016) but Messi choked during penalty kicks and missed the net by a wide margin, essentially contributing to the loss. This image, taken from The Simpsons, reads, “Here is where I go to mourn.”

Just because Cristiano Ronaldo was forced to sit on the sidelines doesn’t mean he just laid down and did nothing. While effectively benched, Ronaldo, settled into a coaching position on the sidelines, advising his teammates on what he would’ve done were he still on the field. And given that Portugal won, it’s possible that Ronaldo has quite a future in coaching once he retires from being an active player. He still cried after the big win for Portugal, only they were tears of joy!

thy were tears of joy.