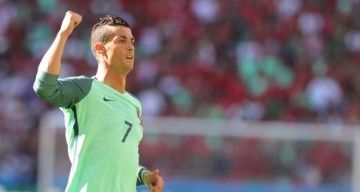 We Don’t Know Who His Son’s Mom Is

Despite the number of women who would likely throw themselves at him, Cristiano Ronaldo is not currently married. He does, however, have a son, Cristiano Ronaldo Jr., who was born in June of 2010. What’s most interesting about this is that the identity of the boy’s mother has never been revealed. Many have stepped forward claiming to be the mom, with the Sunday Mirror once even reporting that it was an American waitress with whom he had had a one-night stand and that a DNA test had confirmed it.

As you would likely expect, the Cristiano Ronaldo net worth is quite high. According to Forbes, the star is said to be worth $88.0 million. His salary from Real Madrid is reported to be in the range of $56.0 million, making him one of the single highest-paid athletes in the entire world, at least for 2016 thus far. Forbes also claims he receives an additional $32.0 million from endorsement deals, which he has with the likes of Nike, Coca-Cola, Castrol, KFC, and others. Ronaldo also has a strong online presence, being ranked as the most popular sportsperson on all social media. He has profited through his online fan base via two mobile apps, as well as from being on the cover of numerous football video games.

Ronaldo wears number seven, a digit also worn for the club by the likes of Bryan Robson and David Beckham. He was hesitant to wear it when he joined Manchester United, realizing having a “7” on your back made for some pretty big shoes to fill; he instead wanted number 26, which is what he had been wearing until that point. However, Sir Alex Ferguson (manager of the team at that time), refused to accept any answer from Ronaldo other than acceptance, with the star eventually caving, if only because of his own confidence rather than the request. Clearly it was the right decision given the amount of people the world who now own a Cristiano Ronaldo jersey with the “7” on the back.

With his fame and endorsements, it’s important for Cristiano Ronaldo to look good, and that includes his hair. However, when he introduced his new hairstyle as part of the Euro 2016, he didn’t get the kind of reaction that he—or likely his sponsors—were hoping for. Ronaldo showed up at Portugal’s semifinal game against Wales sporting a “fade” hairstyle; that’s when hair at the sides and back is cut as close as possible while remaining any desired length on the top. While he and likely his family may have thought it was cool, fans didn’t, and those on social media were quick to let him know they were not digging it!