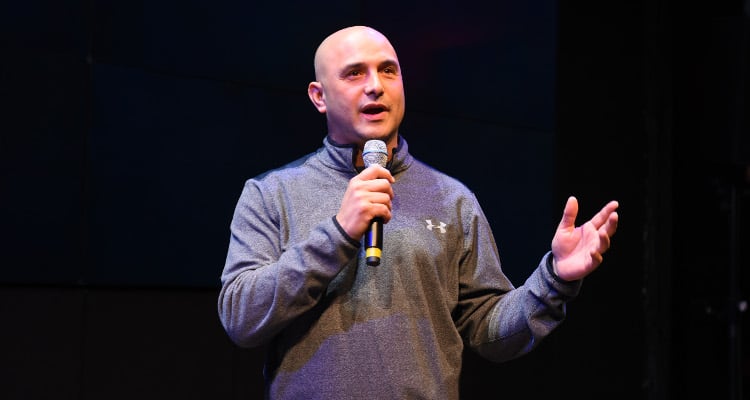 Craig Carton made a name for himself with the sports radio program, Boomer & Carton. But now, he’ll be known for running a multi-million dollar scam. What about Craig Carton’s wife? Where is she while his arrest makes headlines?

Radio host, Craig Carton has had a few scandals in his day. But the latest one takes the cake! He ran a Ponzi-like ticket-selling scheme duping over $5.0 million from investors. Consequently, the FBI came knocking on his door on Wednesday and arrested him. Craig Carton’s wife, Kim Carton, tends to stay out of the spotlight unlike her husband. But with him facing a long prison sentence, people are wondering how Craig Carton and Kim Carton will get through it. People are curious to know about Kim Carton and how she’s coping with her husband’s arrest. Here’s what you need to know about Kim Carton.

Craig Carton is known for making reckless statements on his radio show. From racial stereotyping to making unfounded claims against players, his words have landed him in hot water more than once. Perhaps the often-times scandalous attention on her husband is what prompts Kim Carton to stay out of it. She doesn’t appear to be active on Instagram or any other social media either. So you’re not going to find pics of her in light of her husband’s controversy.

There’s not much known about Kim Carton. The 43-year-old is from Huntington Valley in Pennsylvania. There’s no record of her early life, but she and Craig have been together for many years. They are parents to three sons, Lucky, Sonny and Anthony, and a daughter, Mickey.

Together with Kim, Craig runs his charity organization, Tic Toc Stop Foundation dedicated to helping children with Tourette syndrome. He was diagnosed with Tourettes when he was in his teens. Since his career began more than two decades ago, he has been a champion for eradicating the disorder.

She Helped Her Friend

Jackie Brookstein was displaced by Hurricane Sandy in 2012 and in need of a place to stay. So she turned to her longtime friend and neighbor, Kim Carton. Kim not only gave her a place to stay, she helped Brookstein get back on her feet by collaborating on a business with her.

Carton and Brookstein launched their boutique, Valley at New York’s Tribeca in 2013. Named after the Pennsylvania suburb they grew up in, Valley was started in a location that had a special meaning for the friends. Carton was tired of going all over the country looking for chic “wearable fashion” while Brookstein has always worked in retail.

Tribeca was not considered a shopping hub unlike, say, SoHo. The place needed a makeover into a fashion destination. So they decided to open their first store in Tribeca. They decorated Valley with fixtures from Urban Chandy, which uses recyclable materials and low-wattage bulbs. It carries clothes and accessories from famous brands and even up-and-coming labels. Since opening Valley, Carton and Brookstein have seen commerce develop in Tribeca with more restaurants and malls opening there.

Did Craig Cheat on His Wife?

A blog post on the Carton couple alleged that Kim caught Craig cheating on her with another woman. The Boomer & Carton show welcomed a good-looking addition in the form of makeup artist Dominique Aro to their crew in 2010. She left less than two years later but her departure wasn’t uneventful.

It was alleged that Craig had an affair with Aro and Kim found out about it through a private investigator she hired. But the cheating rumors are unproved and should be taken with a grain of salt. Besides, Aro is married to a man named Kraig. Though, you can see why someone would think she was with Craig.