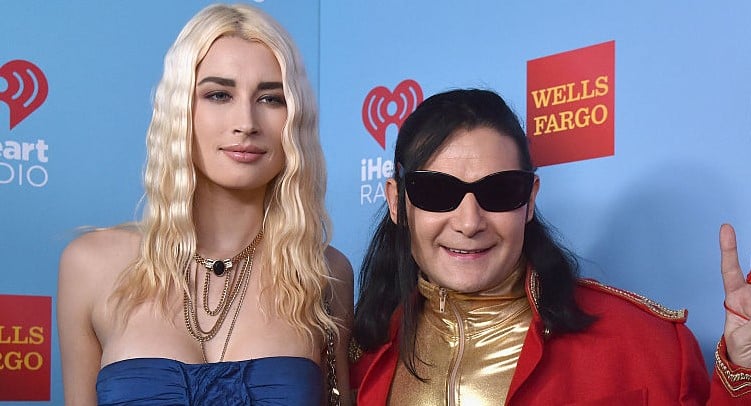 In the wake of the many sexual harassment confessions these past few weeks, Corey Feldman mentioned the name of the man that allegedly abused him as a child. Since the ’80s actor came forward on an episode of Dr. Oz, with his wife by his side, many have been wondering about Courtney Anne Mitchell and Corey Feldman’s marriage. If you want to learn more about Corey Feldman’s wife, then you came to the right place.

Who Is Courtney Anne Mitchell?

Courtney Anne Mitchell’s age is 28 and she’s from Vancouver, Canada. She’s a Corey’s Angels bandmate and Feldman’s third wife. His first wife was general Hospital star, Vanessa Marcil (1989-93) and his second wife was Susie Feldman (2002-2014), with whom he has 12-year-old son, Zen.

If you’re looking for Courtney Anne Mitchell’s pics, then her Instagram profile (courtanne89) is the place to go. On her account, you will find pictures of Feldman, their dogs, and their life together.

The pair exchanged vows on Saturday, November 19, at Sir Elton John’s Fizz champagne lounge at Caesar’s Palace, Las Vegas. But why did they get married following Trump’s victory? According to Feldman, a little bit had to do with Trump being in power, and he didn’t want his girlfriend of four years to get deported!

“I was of course a bit nervous, as any man will admit, you never truly know what a woman is thinking,” Feldman told People. “So as much as I assumed she would be happy and say ‘yes,’ there’s always that insecure part of my brain that regresses immediately to my childhood and thought maybe not.”

“So I kinda chickened out and did a written proposal by writing a note with two check boxes, one for yes and the other for no,” he continued. “Of course there was a ring in there with the note. Luckily she said ‘yes!’”

The actor and musician added: “She was very surprised, excited and started crying. She was surprised because we had both been so anti-marriage since we met. But seeing as she’s Canadian and with [Donald] Trump coming in, we didn’t want to risk being separated by new immigration laws. We both know that we make a good team, and don’t want to be separated  for any reason. So this is the best decision to protect our relationship.”

Don’t expect any kids for Mitchell and Feldman anytime soon, because that’s not the plan right now. Feldman spoke with People and said that he and his wife have decided to wait.

“I have always said I wanna make sure I get it right the first time, and [that] Zen comes out perfectly, well balanced, before I even think about taking on any more responsibility,” the Goonies actor said.

“Courtney is young and she has a career in modeling and music, she would rather keep her body in good shape for now,” Feldman added. “She’s getting good practice with Zen. If we ever were to choose that option it would be much further down the road. Paul McCartney style.”

Walking the Red Carpet with my ❤️@cdogg22 for the #JANE premiere. It was such an honour to be there to witness such a monumental moment. I am so grateful?? #nationalgeographic #janegoodall

On November 2, Feldman named actor Jon Grissom as one of the men that allegedly molested him as a child. Feldman called the LAPD during the segment and recalled when he spoke to the Santa Barbara police about his first claim, back in 1993. According to Feldman, the police turned off the recording during his first claim.

Of another accused pedophile, Feldman said, “They’re living in Mexico … I found that out a week and a half ago. I had a lovely fan – I don’t even know that they’re a fan or just somebody that cares about this topic. But somebody on my Twitter feed posted a video saying, ‘This is the guy.'”

In the latest news, Feldman is currently trying to raise $10.0 million to make a film about the alleged abuse, in hopes of bringing a light on sexual harassment and assault in Hollywood.

At the San Antonio ComicCon with @cdogg22 and @thehairchitect . My angelic outfit was provided for by stylist @Alilevinedesign ❤️?❤️