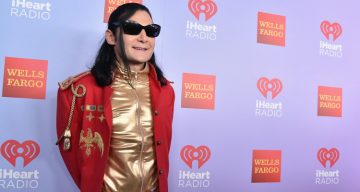 Corey Feldman was a top-billing child star in the ‘80s and maintains a name in the music and acting field today. Corey Feldman’s net worth in 2017 is $2.0 million. And now, he’s is campaigning to raise money to expose child abuse in Hollywood.

Former child star, Corey Feldman, is an icon with multiple teen classics under his belt. But with many child artists, the curse of early fame follows, and The Goonies star’s personal life has been unstable for many reasons ever since.

Most recently, Feldman has made headlines for alleging that there’s a pedophilia ring prevalent in Hollywood, so he is raising $10.0 million to finance a documentary exposing the abusers. But some question the need to raise that substantial amount of money when he could just name the alleged abusers.

Corey Feldman became the poster boy for early fame in the ‘80s. He has a net worth estimated at $2.0 million now, which seems low considering how famous he really is.

Feldman is the son of a musician and a cocktail waitress. He started his career in front of the camera at the age of three with commercials.

By the time he was a teen, Feldman had already accrued several credits in film and television. He starred in top-grossing teen blockbusters like Friday the 13th: The Final Chapter (1984), Gremlins (1984), The Goonies (1985), and Stand By Me (1986).

Feldman didn’t rise to fame alone. Together with his namesake buddy, the late Corey Haim, he starred in the cult classic, The Lost Boys. The movie spawned two sequels and the duo’s nickname, “The Two Coreys.”

Feldman and his best bud became the biggest on-screen pair. They also starred in License to Drive (1988) and Dream a Little Dream (1989).

Back in 1985, Feldman’s salary from The Goonies was reportedly $40,000. And although he was once a top-billing child artist, the latest reports put his annual salary around $352,000 a year.

Until a few years ago, Feldman’s net worth was $3.0 million. But ups and downs in his financial status is nothing new.

The following table illustrates Feldman’s net worth over the years.

As rapid as their rise was to the top, “The Two Coreys” soon found themselves in hard times. They struggled to break away from their teen images, and the offers were drying up. Their subsequent work lacked success, so they did either straight-to-video or C-movies, and then fell into drugs.

Although Feldman was at the peak of his career and earning millions by the age of 14, his finances took a downturn when he was around 15 years old.  The young actor was legally emancipated from his parents and was responsible for his own financial dealings.

Feldman claimed that his parents mishandled his finances when he was a rising teen star and left him nothing to fall back on.

The actor said, “But when I went to my bank accounts to see what my parents had put away for my future, there was $40,000 left.”

Feldman further explained that his father, who was his manager, controlled his money.

“When I went to sign the emancipation papers, all three parties had to sign. My mother agreed, but my father said he wouldn’t unless I compensated him for the time invested in my career. He asked for my last $40,000. So I had to pay him off and, in essence, start fresh,” he said.

After a public battle with drugs, Feldman struggled to make a comeback. He turned to music and reality TV. He co-starred in the reality series, The Two Coreys with Haim and The Surreal Life with his then-wife, Susannah Sprague.

Feldman continued to work with Haim with little success until they had a falling out. Haim eventually passed away in 2010.

The 46-year-old credits music for his financial stability and said, “It brings money in regularly over a period of time due to soundtracks and things like that. That’s steady.” He continued, “With film, you make your money and then it’s over with. With music it’s different because you write stuff and put it out there, and the residuals keep coming in. It can be that way sometimes with film and TV, too, but it weans down every time. The music residuals are steady until they stop playing it.”

Being responsible for his financial future wasn’t easy. Feldman shies away from investing in the stock market after he tried once and lost $10,000.

Feldman’s future is secure thanks to pensions from the Screen Actors Guild and the Producers Pension. But, by his own admission, his financial life has been “tumultuous.”

“I’ve made great amounts of money in my lifetime, but I’ve made many mistakes. I took part in it, and my parents obviously did what they did, and the next five years was spent trying to build up the stockpile again,” said Feldman.

The actor further elaborated that he ran into other problems, which also cost him financially. He was probably referring to his arrests for drug possession, after which he cleaned up his act.

Feldman was later burdened by debt “and then several years after that it became trying to catch up on debts. When you’re living behind the ball, so to speak, it makes it much harder to get out on top.”

A few years ago, Feldman was reportedly evicted from his Sherman Oaks residence for being behind on rent. And after his divorce from actress, Vanessa Marcil, he married actress and model Susie Sprague.

Feldman and Sprague split after seven years of marriage, and she sought sole custody of their son, Zen. Feldman was ordered to pay $750 a month in child support in 2014. In their divorce settlement, Feldman received the 2001 Mercedes, and Sprague got the 2002 Hyundai.

Corey Haim brought up the sexual abuse they went through growing up under the spotlight first. But now, after his death, Feldman is fighting for justice.

In his 2013 memoir, Coreyography, Feldman detailed horrible anecdotes of sexual abuse. But, he claims that Haim suffered more direct abuse.

Feldman had a close friendship with Michael Jackson and for years. He has reiterated that the late “King of Pop” never abused him.

In 2017, in the wake of the Harvey Weinstein scandal, he launched an Indiegogo campaign to finance a film worth $10.0 million, where he’ll blow the whistle on the pedophilia ring he believes is running in Hollywood. While he has been talking about child molestation in the industry for years, he’s never named anyone because he had legal ramifications to worry about.

When asked why he needs a large sum of $10.0 million, Feldman claimed that it’s necessary to retain editorial and distribution independence. There’s also the looming question of why he doesn’t just go to the police.

“I’ve told the police. In fact, if anybody wants to go back to 1993 when I was interviewed by the Santa Barbara Police Department, I sat there and I gave them the names. They’re on record. They have all of this information, but they were scanning Michael Jackson. All they cared about was trying to find something on Michael Jackson,” Feldman said in one of the many interviews he’s giving as part of a national TV tour.