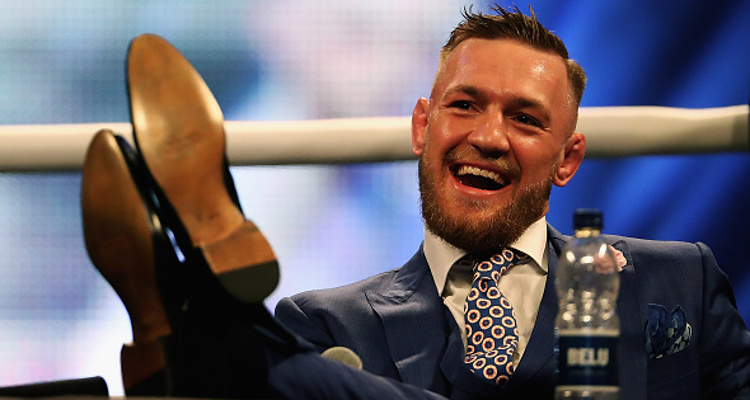 Patience is wearing thin as the wait for the eagerly awaited fight between Floyd Mayweather and Conor McGregor! Fans want to know everything about the fighter poised to win, and if you are one of them, then scroll down for five facts you did not know from Conor McGregor’s wiki!

UFC champ Conor McGregor is living it up! From expensive (and illicit) suits to his thousand dollar watches, he knows how to flaunt his success. But that’s not what he is known for. His fighting style is almost unpredictable, and his agility is what earned him his riches and titles. McGregor was not always the man he is today, and his journey to the top came with a lot of sweat and blood —literally. Check out five facts to know about Conor McGregor in his wiki.

Where is Conor McGregor From?

Originally from Crumlin, Dublin, in Ireland, the MMA fighter was born on July 14, 1988, making McGregor’s age 29. Did you know he started boxing at the age of 12? But it wasn’t until 2006, when his family moved to Lucan and McGregor met fighter Tom Egan, that he started training in MMA.

His Trainer is John Kavanagh

John Kavanagh has been shaping The Notorious for a while now, and the award winning MMA coach is all ready to watch his boy win his upcoming fight! He even wrote a book titled, Win or Learn, MMA, Conor McGregor and Me: A Trainer’s Journey. He also went on record saying, “We’re going to have fun with this. This is sport, it’s a great event, it’s going to be one of the most-watched events of all-time maybe, everybody has an opinion on it, and I’m very honored to be playing a part in it.” Well, we surely know the award-winning coach is putting everything he knows into training McGregor this time!

McGregor doesn’t shy away from the camera, either! We all know how cocky he can be outside the ring and, well, many have cashed in on his amazing physique and fame. He appeared for a number of magazine covers, but the most remembered will be his picture in ESPN’s “Bodies We Want” issue, that left nothing to the imagination! He’s been on many famous spreads like GQ, Men’s Health, Sport’s Illustrated, and more. Conor McGregor’s net worth is estimated to be $35.0 million, and he is not illusive about his riches!

It is an honour to grace the cover of @gqstyle magazine this month! Get your copy in stores NOW! Shoutout to the great @mobolajidawodu on the style! Much love my brother!

He Has an Amazing Record

McGregor did not get so successful just by fighting numerous matches, but by his technique! As far as McGregor’s concerned, we all know that his opponents are typically left reeling around the ring, while McGregor takes another title home. According to ESPN, McGregor’s record includes 18 knock-outs in 21 matches, with only 3 losses.

His Girlfriend Has Been By His Side for Years

Conor McGregor’s girlfriend and mother of his little angel, Dee Devlin, is also from Ireland. McGregor never fails to give Devlin credit and made it clear that she has been with him through all of his highs and lows. He also mentioned that she is the one who keeps him going. And, after eight years together, their relationship is only getting stronger. Dee Devlin quit her job so McGregor is not alone in his journey. She is a businesswoman, and financially supported him when he was struggling. She’s always seen by his side and he only has good things to say about her like, “My girlfriend worked very hard throughout the years and stuck by me when I had essentially nothing.” They couple welcomed a baby boy on May 5, 2017. The three-month-old is all over McGregor’s Instagram page and is too adorable for words!