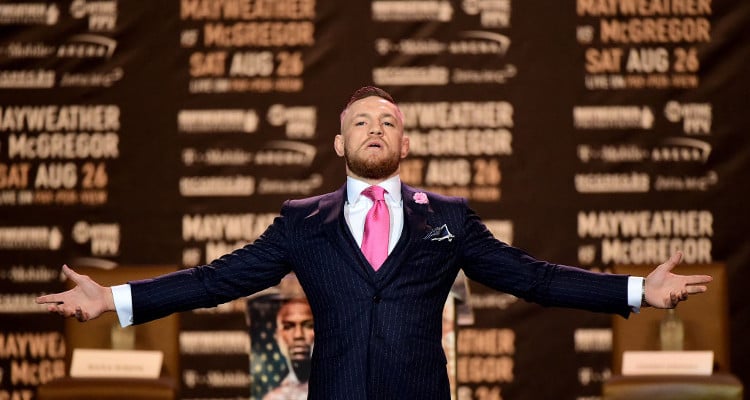 Conor McGregor’s suit caught everyone’s attention at the press conference held in Los Angeles on July 11. He was there to promote his big August 26 fight against Floyd Mayweather. But taking a closer look at McGregor’s suit, people began to notice something interesting. In true McGregor style, the pinstripes that covered the suit were actually made up of the words “F**k You,” written in very fine print! It shouldn’t have come as a surprise as he’s the poster boy for instigation, but it’s all anyone can talk about today.

To say that Conor McGregor was “in your face” with Floyd Mayweather at the press conference held on Tuesday (July 11) night would be an understatement. The fighters faced each other at a raucous press conference held in Los Angeles to promote their eagerly awaited fight, scheduled for August 26, 2017 in Las Vegas, Nevada. It was the first press meeting between McGregor and Mayweather and both fighters freely traded barbs, insults, and expletives with each other, much to the delight of the 11,000 strong crowd. Conor McGregor’s “F**k You” suit stole the show, as he appeared cool and suave compared to Mayweather’s casual attire. Conor McGregor’s suit clothing line has become one of the highlights of the fighter’s arsenal, which he uses to put pressure on his opponents.

A Champion in His Own Right

The start of a great day in my storied career.

McGregor is well-known for his confidence —bordering on arrogance— and running his mouth, but Tuesday’s press conference showed a new level of insult handed out to his opponent. Conor McGregor’s pinstripe suit had the words “F**k You” written all over it, which could be read from up close. The words seem to have become the most loved/hated fighter’s trademark, along with his flashy displays of ego.

McGregor is a professional mixed martial artist and is the reigning UFC Lightweight Champion and former UFC Featherweight Champion. He has the biggest pay-per-view draw in MMA history and is known for his lavish lifestyle and “trash talking.” He is one of the highest paid athletes in the world, according to Forbes. (As if he doesn’t brag about it enough…)

The suit says fuck you

But at last night’s pre-fight press conference, Conor McGregor’s suit got all the attention. McGregor even mocked Mayweather’s attire, as he came dressed in a somewhat casual stars and stripes tracksuit. Poking fun at Mayweather, he said to the crowd, “He’s in a f***ing tracksuit, he can’t even afford a suit anymore!” Mayweather sat calm and stoic on a stool, while McGregor (full of energy) moved around and taunted him saying, “On August 26, this man will be unconscious, he’s too small, he’s too frail!” Mayweather didn’t take these insults lying down. After waving around a “Hundred Million Dollar cheque” and McGregor making a comment about the tax man, Mayweather clapped back saying, “You’re right! I’m the IRS! And I’ma tax your ass!” He also told McGregor that he would be the one “waving the white flag.”

Conor McGregor’s press conference has set the stage for a highly anticipated fight between these two world class fighters with differing styles. Though Mayweather has a flawless 49-0 record and is looking to better it, McGregor is no spring chicken. His aggressiveness and confidence (or overconfidence?) was presented on display in the suit he wore for the first of four joint appearances to promote the August 26 fight. McGregor spoke about his suit saying, “How’s this suit look? It’s a cracker. An August-McGregor line, I’ve got my own line of suits coming out. If you zoom in on the pinstripe, it says ‘F**K YOU.’” McGregor gets his suits custom-made by David August. He is known to have spent up to $50,000 on a set of suits at a time, and he might actually be coming out with his own line of suits!

The Drama Has Just Begun

Fans and the media are eagerly anticipating what McGregor will wear for the remaining three press conferences scheduled to promote this once-in-a-lifetime match. After all, it’ll really difficult to top the “F**k You” suit he just wore. But knowing McGregor’s brashness and smarts, we can expect something equally outlandish in the future.