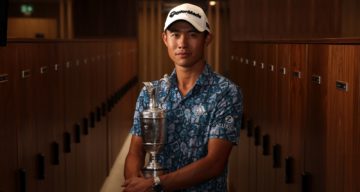 Collin Morikawa continues to ascend! The young golfer just added the 2021 British Open win to his growing list of titles and prizes. Besides the cash prizes, sponsorship deals and smart career choices add to his wealth. Now Collin Morikawa’s net worth in 2021 is estimated at $7.0 million, with more room to grow. It’s no surprise that he is counted among the top earners in professional golf. A glimpse into how he built his fortune illustrates Morikawa’s potential to be one of the standout golfers on the PGA Tour.

California-born Collin Morikawa was born on February 6, 1997, and is of Chinese and Japanese descent. He played collegiate golf at the University of California, Berkeley, before graduating with a degree in business administration in 2019.

He had already established himself as an amateur and would go professional straight out of college, making his debut at the 2019 RBC Canadian Open. In the same season, he earned his spot on the PGA Tour, and soon scored his first win at the Barracuda Championship.

When the 2020 season picked up after the pandemic forced all sporting events to halt, Morikawa won the third and biggest title of his career, the 2020 PGA Championship. He is among the youngest pro golfers to win the event before the age of 24.

As of July 2021, Morikawa has secured five wins on the PGA Tour and three on the European Tour. His wins and the cash prizes that come with them put his total career earnings at a cozy $11.8 million.

The following table illustrates his wins and approximate career earnings.

A young golf champion like Morikawa has plenty of appeal to draw in sponsorship deals. Part of the credit goes to his agents at Excel Sports Management, who also have Tiger Woods as a client.

Morikawa and Excel have forged deals with TaylorMade, Adidas, Omega, Therabody, U.S. Bank, Cadillac, and Grant Thornton, just to name a few. While his opponent, Jordan Spieth, is currently among the top earners in golf wins and sponsorships, Morikawa is predicted to surpass him this season with a bump in asking price from endorsers.

Morikawa joins the ranks of golfers with an enviable collection of cars from their sponsors. As he is a brand ambassador for Cadillac, he was recently spotted with a brand-new Cadillac Escalade.