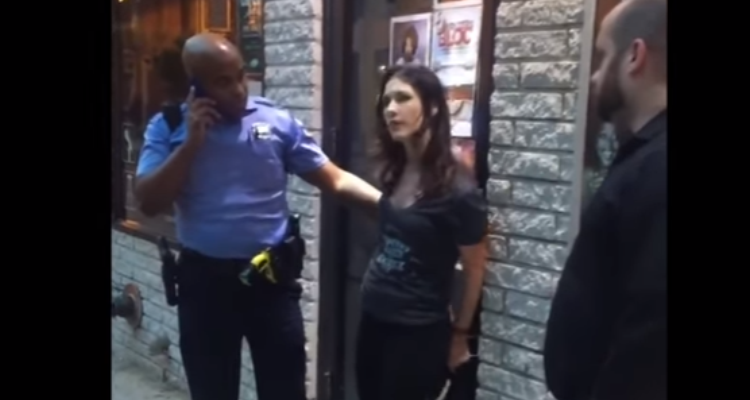 The video of former PHL 17 reporter, Colleen Campbell abusing a calm and dignified cop has gone viral. Campbell is suspected to have been drunk at the time. Among the serious charges against her include disorderly conduct and resisting arrest. Campbell claims she may have been “unknowingly drugged” prior to yelling at the cop.

It’s very tough to watch Colleen Campbell’s video, where she is ranting and yelling at a police officer outside of Helium Comedy Club in Philadelphia. This shameful incident took place on Sunday, June 4, 2017, when an allegedly drunk Campbell went after a cop and showered him with shockingly abusive language. The officer was insulted but kept his cool and is now being praised for his calm demeanor as the reporter was shouting at him. Colleen Campbell was a reporter for PHL 17, who was asked to leave the comedy club on Sansom Street after repeated warnings to stop talking. New York City comic Wil Sylvince posted a video on Facebook of the reporter’s rant, and it has more than 4.2 million views and counting, so far.

The video shows Campbell standing outside the club shouting obscenities at a quiet and dignified cop, telling him that society hates the police. The police officer at this point does not do anything, but waits for her to calm down. Campbell then tried to spit on the face of a man who is reportedly the club’s manager. She also took off her right shoe and tried to shove it in the man’s face saying, “Smell my shoe, b***h.” It’s only after this that the police officer went to Campbell and handcuffed her. This video has gone viral and the television reporter has since been fired from at PHL 17. She was also fired from her bartending job at the Devil’s Den.

Colleen Campbell, the PHL 17 reporter, has been charged with resisting arrest, criminal mischief, and disorderly conduct. Now, the police are saying that the matter is worse than people initially thought. In a statement, the authorities said that after the cool, collected cop led her away from the club, Campbell assaulted him. It has been reported that she repeatedly kicked the officer and kicked the doors and windows of the police car she was in. Apparently, what is seen in the “reporter yells at cop” video seems like child’s play compared to what happened once the camera stopped recording!

Too Late to Apologize?

On Wednesday, June 7, the 28-year-old Campbell issued a statement apologizing to the police officer, the Philadelphia police department, and her former employers. “I am ashamed and embarrassed by my actions. They were profane, inappropriate and offensive. They do not reflect the person I am or how I was raised. The person in the video is not the real me.” Campbell is claiming that she might have been “unknowingly drugged” at some point before her outburst. Whatever the result might be, the conduct and patience of the police officer must be appreciated. He maintained calm and dignified under trying circumstances, and he made the police department proud.