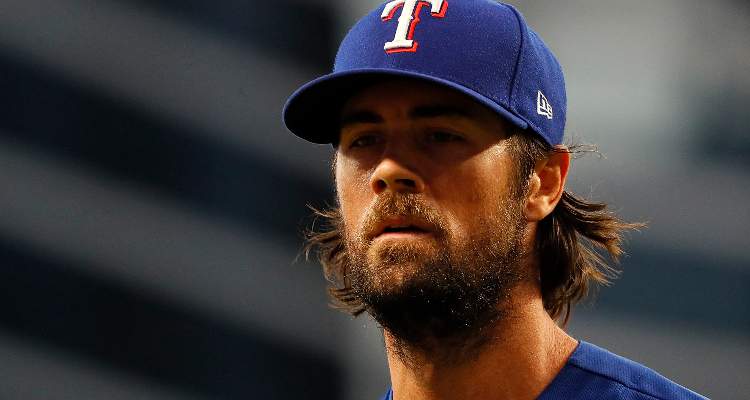 Texas Rangers pitcher Cole Hamels and his wife, Heidi Strobel, are known for their charitable acts, but their latest takes the cake. Strobel went from reality TV to helping children. Keep reading to know more about Cole Hamels’ wife in Heidi Strobel’s wiki.

If you never missed a season of Survivor, you might remember Heidi Strobel. The extremely intelligent beauty didn’t make it far, but she sure made an impression. Since marrying MLB pitcher Cole Hamels, Strobel focussed her energy on philanthropy.

Most recently, Heidi Strobel and Cole Hamels made headlines for donating their mansion to special needs kids. Get the scoop on this former Survivor, right here.

Heidi Strobel was a contestant on Survivor: The Amazon, the sixth season of the franchise that aired way back in 2002. She was eliminated on Day 36 but was the most memorable of the cast. She became infamous for performing a striptease with season winner Jenna Morasca for snacks!

In the reunion special, host Jeff Probst revealed that Strobel had the highest IQ of any of the castaways that season. Well, no wonder her fellow castaways saw her as a threat! She was picked for the show because the general audience wouldn’t believe a pretty blonde is strong and smart.

The daughter of a navy pilot, Strobel traveled all over the world as a child. So, she originally auditioned for the global scavenger hunt, The Amazing Race. But the show’s creator felt that she was better suited for Survivor.

It is AB-TOBER!!❤️❤️❤️I posted a few weeks back telling you guys about these groups that I lead for 21 days… most of my groups (in 3 weeks time ) lose around 10-15 pounds in 3 weeks. I promise my workout plans/eating plans are coming soon ( February launch on all my products) – I can’t wait to show you all how you can work, be a parent, travel – and most important – balance it all with food and exercise. ❤️❤️ P.S.- new favorite running bra- @aloyoga and pants are Lilybod I got @stylerunner . Shoes- I’m usually a @newbalance kind of girl❤️❤️. #3weekstoday #beforeandafter #aloyoga #newbalance #5pregnancies #nophotoshop #lilybod #workingmom

Many Feathers in Her Cap

Heidi Strobel’s Instagram account states that she’s a “Country Music Song Writer” and the “Founder of The Hamels Foundation,” along with, “CrossFit / Tabata / Running Junkie” and “World Traveler.” You can also find plenty of Heidi Strobel’s pics there, too.

Born on October 9, 1978, Heidi Strobel’s age is 39. She always kept herself busy, even as a child. She sold eggs, created a neighborhood newspaper, and turned her kiddy drawings into an art exhibit.

Strobel was studying to be a teacher when she auditioned for The Amazing Race. She graduated with a bachelor’s degree in exercise physiology, secondary education, and physical education from Drury University in Missouri.

During her Amazon adventure, Strobel was a P.E. and health teacher pursuing a master’s in physical education. She planned to pursue another degree in nursing. Before that, Strobel was a sales representative for a lingerie company, a secretary in a doctor’s office, and the manager of a fireworks company.

Running, writing poetry, and dance music were her favorites things to do. The 39-year-old was a member of numerous P.E. bodies in her hometown of Missouri.

Writing session with @saraspicermusic – this song (Bourbon Soaked Chair) ❤️❤️- if you love any of this please go follow her- ?. I’ll post more about our writing process and how we come up with songs – I wrote this song because so many people think all their bad decisions are permanent and can’t be forgiven- this song is not only about forgiveness of others – but forgiveness of self. #saraspicer #bourbon #writingprocess #countrymusic #forgiveness

They Adopted a Child

Heidi married Philadelphia Phillies pitcher Cole Hamels in 2006. She gave birth to their first child, a boy they named Caleb Michael Hamels, in 2009. Their second son, Braxton Hamels, was born in 2011.

The couple adopted an Ethiopian baby girl named Reeve in 2012. They spent four long years going through the international adoption process before they were able to bring her home.

She Runs the Family Foundation

The Hamels Foundation was launched in 2008 by Strobel and Hamels. It’s one of the most active charitable organizations by a baseball player. Strobel is so passionate about helping underprivileged children, that she and her MLB husband spent her honeymoon with orphans in Africa.

The Hamels Foundation runs children’s programs in Philadelphia and Africa. The pitcher even puts in his own money to pay for the staff and merchandise. Every penny earned from Cole Hamels’ merchandise sales goes to the needy children in Africa. Strobel also delivers supplies to AIDS-affected orphans during her many trips to African countries.

Their most recent charitable venture included donating more than money. The couple gave their $9.6 million mansion with 100 acres of land in Missouri to Camp Barnabas, which provides camps for children with special needs and chronic illnesses.

They bought the mansion thinking it would be their dream house. But since Hamels signed with the Rangers, they moved to Texas and hadn’t lived in that house for years. So, they decided to put it to good use and for a good cause.

“Seeing the faces, hearing the laughter, reading the stories of the kids they serve; there is truly nothing like it,” Cole Hamels said in a statement. “Barnabas makes dreams come true, and we felt called to help them in a big way.”

And so it begins…. the prep for this magical time of year!! Live tree✅ lights actually work from the year before ✅ no fights over who put up the star✅ pretty sure some ornaments went missing in the last tree✅ ??????. I’ll show some more/better decor as we get it put up later tonight!! #christmas2017 #familygoals #christmastree