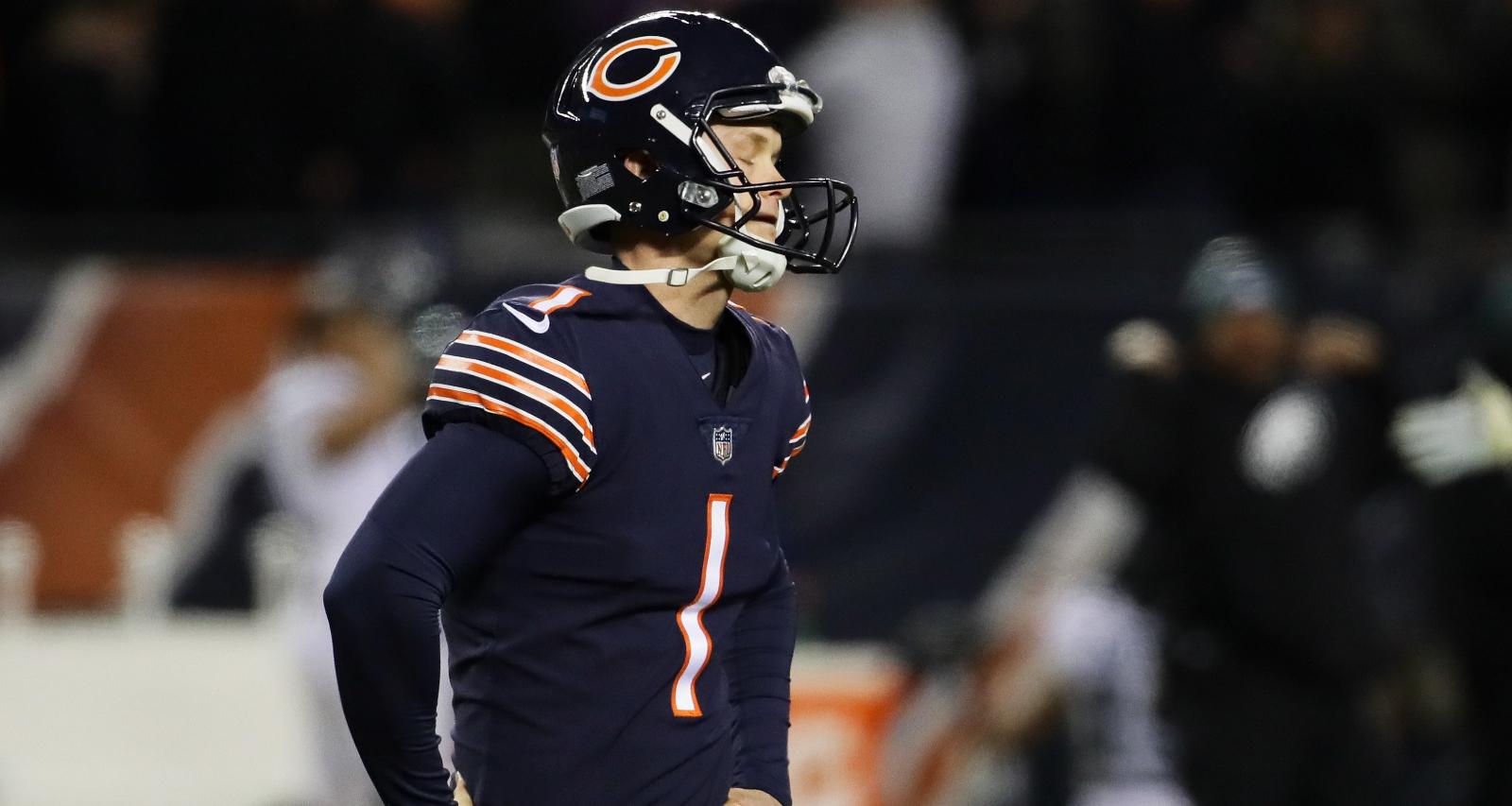 Cody Parkey #1 of the Chicago Bears reacts after missing a field goal attempt in the final moments of their 15 to 16 loss to the Philadelphia Eagles (Photo: Jonathan Daniel/Getty Images)

The Chicago Bears were one point away from winning Sunday’s (January 6) NFL wild-card playoff against the Philadelphia Eagles. However, Bears placekicker Cody Parkey missed his kick and cost his team a potentially game-winning field goal. But, more so than the lost opportunity, it’s how he missed that’s sparked a hilarious reaction from Bears fans on the Internet.

The Bears lost to the Eagles 16-15 on Sunday, and Bears fans blame Cody Parkey. The 26-year-old was set to attempt what seemed like a perfectly easy kick to make—a 43-yard field goal. However, the ball veered a little too far left before hitting the left upright and bouncing off the crossbar and into the field. Check out the video of Cody Parkey’s hilarious double-doinker below.

The Internet was, of course, quick to react to Parkey’s embarrassing moment. While he’s become the subject of boos from Bear fans, reports suggest it’s not entirely his fault. Apparently, the Eagles’ Treyvon Hester and the tips of his fingers are the real culprits (or saviors) that sent his team to the divisional playoffs. After the game, the Eagles confirmed that Hester’s fingers tipped the ball mid-air at the line of scrimmage and deflected it oh so slightly, changing its trajectory towards the upright.

Though it was Hester’s season-saving fingertips that really pulled off a miracle for his team, Parkey has become the butt of endless jokes. Especially since this is the sixth time one of his kicks has hit the upright since November 2018. (Incredibly, his kicks hit the upright four times in one game!) The poor guy feels horrible enough that he missed what he thought was a clean kick. And now he’s become the first meme of 2019.

#2 Netflix Did Warn against the #BirdBoxChallenge

So many new memes thanks to one play. RT @Deadspin Staley Da Bear died tonight, and Cody Parkey killed him pic.twitter.com/gvVl8OJ0Mi

The Eagles are still alive thanks to the left hand of Treyvon Hester, who tipped Cody Parkey’s final kick. pic.twitter.com/NliKZhQ2eZ

#9 Eagles Fans’ Telekinetic Powers Were at Their Maximum on Sunday

#11 Match Made in Heaven

#13 Ending the Season with a Bang

they said Cody Parkey couldn't do better than hitting the upright four times in one game. SO HE HIT THE UPRIGHT TWICE IN ONE KICK

It’s only 6 days old, but Cody Parkey is already having the worst 2019.

#15 Seriously, Though, the Threats to Parkey Need to Stop

Oh it's going to be a tough week.

Also Check: 10 Memes about the Colin Kaepernick & Nike Boycott Issue That Will Make You Laugh Out Loud