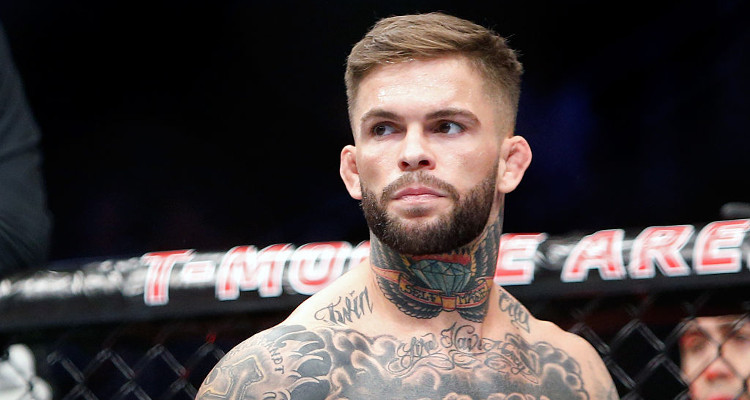 Cody Garbrandt is currently recuperating from a back injury, but the UFC fighter never shies from a fight. He gave his bizarre beef with a body building Internet troll a pass. We’re guessing he’s busy planning his wedding. Let’s just say, Cody “No Love” Garbrandt needs a new nickname!

UFC fighter, Cody Garbrandt is not one to turn down a fight. But when Matthew Kline Kader, a body builder who is also an Internet celebrity challenged him, he gave it a pass. It was a bizarre and facepalm-worthy exchange between the two which hardly seems genuine. Garbrandt pulled out of UFC 213 because of a back injury. Guessing from his Instagram, he’s spending a lot of time with the lady in his life. If you haven’t heard of her, she’s Danny Pimsanguan, a beautiful woman who commands attention outside the octagon the way Garbrandt commands in it. Find out more about Cody Garbrandt’s fiancée in Danny Pimsanguan’s wiki.

Danielle Pimsanguan is a model from Las Vegas. But she writes on her Instagram bio, “Thai Fisherwoman.” She was born in June 1986, which makes her age 31, six years older than Garbrandt. She has a twin sister named Lena and even they can’t tell each other apart in their old photographs!

Danny is a model for Wet Republic Ultra Pool in Las Vegas and recently partied with Steve Aoki and Calvin Harris. She keeps fit with Lena by doing some Muay Thai kickboxing. And Danny even trains at Team Alpha Male facility, which is Garbrandt’s home ground.

He Proposed with a Massive Sparkler

Garbrandt and Pimsanguan went on a trip to Sedona, a desert town in Arizona this April. No Love popped the question to his girlfriend of one year in the middle of the desert, and her answer was predictably a “yes.”

They shared the news of their engagement on Instagram, but nothing caught our eyes more than the massive bling on Pimsanguan’s finger. The details of the ring haven’t been revealed, but it’s clear that No Love is not without love when it comes to picking an engagement ring.

The couple isn’t planning a wedding right away. At the time, Garbrandt was preparing for his fight with TJ Dillashaw, his longtime rival, and former Team Alpha Male teammate. Dillashaw took the time to put their Twitter squabbles aside to congratulate his rival on his engagement. Sadly, their bout was canceled due to Garbrandt’s injury.

He Dated Another MMA Fighter

Before he took a shine to the Wet Republic model, Garbrandt was dating another MMA fighter. Paige Vanzant is a UFC fighter in the women’s strawweight division. You might remember her from Dancing with the Stars Season 22 where she and her partner, Mark Ballas, made it all the way to the finals but lost to model, Nyle DiMarco.

They dated for a while but parted ways amicably. They continue to train together, and Vanzant even joked that he dumped her after she knocked him out.

Fun In the sun with my Twinner @lena_pimsanguan #twins #Thailand