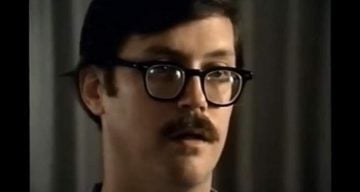 Mindhunter certainly got one criminal on point alright! Ed Kemper confessed to killing six young women, his grandparents, and his mother, and Netflix has simply nailed his character on the show. The serial killer confessed to killing and raping his victims, and on Mindhunter, the actor who played the criminal, (Cameron Britton) made everybody shudder. Here’s everything you need to know about the real Ed Kemper.

Ed Kemper’s Mindhunter bit was the talk of the town when Netflix came out with its original series. Everybody had heard about the serial killer who would decapitate his victims, but never had they seen him like this before.

Mindhunter brought us the science behind the psychology of these killers, but they didn’t go deep into his brutalities. People searched for the creepy and spine-chilling Ed Kemper wiki after the show, and we have just what you’re looking for.

Ed Kemper was born to parents Clarnell Stage and Edmund Emil Kemper II (a World War II veteran) in Burbank, California. When he was born, Ed Kemper weighed 13 pounds, which is an unusually heavy weight for a newborn. And by the age of four, he was already a lot taller than his peers.

Kemper’s parents would always bicker in front of him and his sisters (he was a middle child), and would often hear his mother belittle his father about the menial electrician jobs he would do. He had heard his father talk about how it would be easier to go to war than stay with his mother.

His mother would often punish the young Kemper by sending him to the basement to spend the night. And by the time he was 10, his psychological tendencies were already showing up.

Kemper once buried a pet cat alive, and after it had died, he dug it up and dismembered it. The heinous crimes he committed later began in his very own backyard.

Many times when Kemper played with his sister, he would pretend to be in a gas chamber. He would tie himself to a chair and ask his sibling to turn on an imaginary switch, to which he would writhe on the floor as if he was choking.

When Kemper was a 13-year-old, he went on to kill another pet cat because he thought it was favoring his sister over him.

Ed Kemper had gone through some near-death experiences, too. Once, his sister almost pushed him in front of a train. And on another occasion, she successfully managed to throw him into the deep side of the pool, almost letting him drown.

Kemper was growing taller and heavier than any of his classmates. And in one of his interviews, he confessed that his mother and sisters would make fun of his hugeness.

His mother, Clarnell Stage was an alcoholic who had a habit of humiliating and making fun of her son most of the time, commenting about how he was just like his father. It was later found out that she suffered from borderline personality disorder.

Kemper was close to his father, as he was the only male member of the family Kemper had to look up to. But there came a day when his father could not tolerate his mother anymore, and they decided to separate. He left the kids with her, and the young Kemper couldn’t accept it.

The relationship with his mother was severely troubled. And now with his father gone, he was in psychological shock.

Kemper’s mother would always lock him up in the basement because she feared that he would hurt the girls. And by the age of 14, he ran away from home looking for his father. When he found him, he saw that his father was married and had another son, but stayed with him for a few days.

His father then sent him to his grandparents’ who resided in North Fork. Kemper explained later how much he hated his stay at North Fork, and how he could relate his nagging grandmother to his own mother. He described her as senile and said that she “was constantly emasculating me and my grandfather.”

This hatred towards his paternal grandparents pushed him over the edge. And on August 27, 1964, he shot his grandmother as she sat at the kitchen table.

His grandfather had given him a .22 caliber rifle to use for hunting, and he used the weapon to shoot his grandmother in the head. He fired two more times into her back and stabbed her with a kitchen knife, too. The post-mortem report suggested that the stab wounds were inflicted after she was dead.

Kemper dragged her body to his bedroom. And when he heard his grandfather coming after grocery shopping, he killed him in the driveway.

After killing the two, people Kemper was left clueless as to what to do next. So, he called his mother on the phone, and she told him to inform the authorities. Kemper did as he was told, so he called the local police and waited for them to take him in.

He was 15 years old at the time and was sent to Atascadero State Hospital’s criminally insane unit after he was diagnosed with paranoid schizophrenia by the court psychiatrist. When he was asked why he killed his grandparents, Kemper said that he “just wanted to see what it felt like to kill Grandma.” He later said that he killed his grandfather because he did not want him to know that his wife was dead.

Ed Kemper was released from prison after he was regarded as a model prisoner and had begun working when he was 16 years old. He was even once engaged to a woman.

Kemper’s victims were usually young female hitchhikers. He had a pre-meditated pattern with all these women. He would pick them up and drive them to isolated places where he would shoot, stab, or suffocate them to death.

In another horrific revelation, Kemper confessed that he would take these women’s bodies home and rape them. He would then dismember them before he discarded their body parts in the mountains or throw them off a cliff.

Kemper has killed six women: Mary Ann Pesce, Anita Luchessa, Aiko Koo, Cindy Schall, Rosalind Thorpe, and Allison Liu. They were all young women in their teens or early 20s and were all killed in the same fashion after getting into the car with him.

The Last of Ed Kemper’s Murders

The last of his victims was his own mother and one of her friends. In 1973, His mother had come home after a party, and Kemper awoke from the noise. He waited for her to fall asleep, and then hit her with a claw hammer and slit her throat.

After killing his mother, Kemper went for a drink. When he returned, he called his mother’s friend for a movie and dinner. Once she arrived, she too was met with death, as Kemper strangled her and left a note near the body for the police.

Kemper later called the authorities and confessed to killing all these women. He was charged with eight counts of first-degree murder. And when he pleaded for a death sentence, California State had rebuked the punishment, so Ed Kemper received life imprisonment instead.