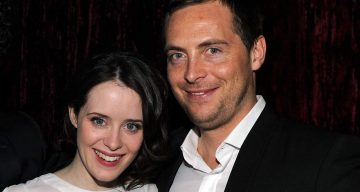 Stephen Campbell Moore has reportedly been separated from his wife, Claire Foy for a while now. Foy went public with this in a statement released on February 22, 2018. Moore’s recovering from brain surgery and is the father of their two-year-old daughter, Ivy Rose. He impressed audiences and critics with his excellent performances in film, TV, and theater.

Even though Claire Foy and Stephen Campbell Moore separated “some time ago,” it’s only now that the matter is coming to light. Foy confirmed in a statement that though she and her actor husband spent seven years together, they decided to split amicably.

She spoke to The Sun and revealed that they parted ways long before the news was made public. Foy, who first met Moore when they worked on the 2011 film Season of the Witch, announced her separation months after Moore underwent surgery to remove a brain tumor.

People who didn’t know about the couple’s relationship status are taken by surprise and want to know more about the actor. We have some details from Stephen Campbell Moore’s wiki.

Background in the Arts

Born on November 30, 1979, in London, England, Stephen Campbell Moore’s age is 38. The actor is best known for his roles in the play The History Boys, and its subsequent film version.

He was educated at Berkhamsted School in Hertfordshire and took part in the Pendley Open Air Shakespeare Festival before training at the Guildhall School of Music and Drama. Moore made his on-screen debut in Bright Young Things, a 2003 British drama.

He appeared in several movies over the years like: A Good Woman, Amazing Grace, The Bank Job, The Children, Johnny English Reborn, The Lady in the Van, The Ones Below, Burnt, and Goodbye Christopher Robin.

Moore did a lot of work on television and appeared in TV series like: He Knew He Was Right, The Sea Wolf, Titanic, Hunted, and The Last Post. His performances were also appreciated in the TV films Byron, Just Henry, Complicit, The Go-Between, and The Child in Time.

Moore has a passion for theater as well, and made sure that he performs on stage whenever he can make time in his busy schedule. Some of the plays that earned him praise are: All My Sons, Clybourne Park, Berenice, Chimerica, and Photograph 51.

Now, Moore’s separation from Foy has come as a surprise to many, who assumed that the couple were still together. Foy said, “We have separated and have been for some time. We do however continue as great friends with the utmost respect for one another.”

Also Read: FACT CHECK: How Accurate is “The Crown” Season 2? Is The Story True?

A Daughter to Raise

The couple’s separation leaves their two-year-old daughter, Ivy Rose in the middle. A source claimed that the estranged couple are working hard to keep their split amicable for her sake, saying, “After seven years together this came as a real shock to many of their friends, but they’re lovely people and are determined to keep everything civilized.”

Moore had some health problems of late, and underwent his second life-saving operation in five years this past July. In 2012, it was discovered that he had a walnut-sized tumor in his pituitary gland after having a brain scan following a bout of anxiety.

A Long Road Ahead

The announcement of Moore and Foy’s split came at a particularly bad time as he is reportedly still recovering from surgery. We wish him all the best for his health.