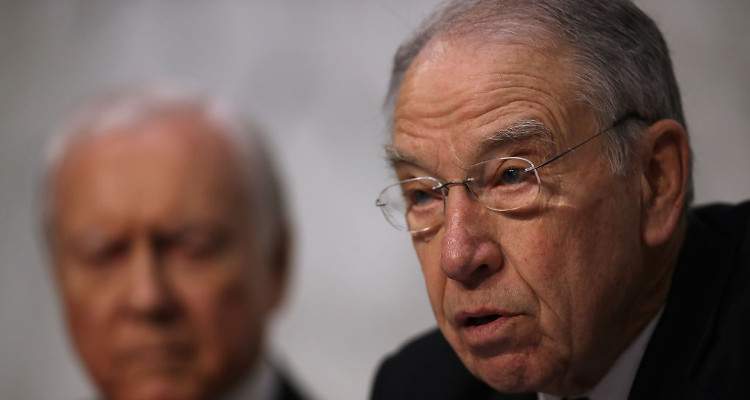 The chairman of the Judiciary Committee, Chuck Grassley is in the limelight because he’s defending his party’s tax plans. Being a well-known name in the world of Politics, it comes as no surprise that Chuck Grassley’s net worth is estimated at $3.76 million! Here is everything you need to know about the GOP Senator from Iowa, right here in our Chuck Grassley wiki.

Born Charles Ernest Grassley on September 17, 1933, Chuck Grassley’s age is 84. He was born in New Hartford, Iowa to Louis Arthur and Ruth Grassley. In 1955, Grassley completed his B.A. and in the following year, he completed his M.A. While he was pursuing his studies, Grassley was a part of the social-professional Alpha Gamma Rho Fraternity.

Reportedly, during the ‘50s, Grassley farmed and worked in several factories in Iowa. Initially, he worked as a sheet metal shearer and later on as an assembly line worker. In fact, Grassley also tried to complete Ph.D. in Political Science from the University of Iowa but could not complete it. From the late ‘50s to 1975, Grassley represented parts of Butler County in the Iowa House of Representatives. Later on, from 1975 to 1981, Grassley served in the United States House of Representatives.

Additionally, Grassley supports the repealing of the real estate tax, a tax on inherited assets above $5.5 million for individuals and $11.0 million for couples. Grassley is under fire for a recent comment he made, claiming that individuals who are not investing their money are just spending it on booze, women, or movies. Grassley commented, “I think not having the estate tax recognizes the people that are investing, as opposed to those that are just spending every darn penny they have, whether it’s on booze or women or movies.”

However, his comments received a lot of backlash on social media! People took to Twitter and expressed their disappointment in Grassley’s statement. In fact, a former spokesman for Hillary Clinton, Jesse Ferguson also took to Twitter and wrote, “Darn straight, Sen. Grassley. if we gave that money in middle class tax cuts, they’d just waste it on hookers and blow, right?” (A bit of backhanded humor from some, and the tweets continued to pour in!)

Reportedly, Grassley also believes that gun laws will not help to reduce or prevent gun deaths or violence connected to guns. He believes for this to be possible, mental health care is also essential. Recently, Grassley also commented on Roy Moore’s sexual assault allegations. Grassley feels that Moore should step aside.

Grassley said, “He should step aside. The trouble is, if he agreed to step aside, his name is still on the ballot. People can still vote for him and he could get elected.” He further added, “I wish that we had a kind of a uniform view throughout Congress on this. But we had a Democratic senator for 54 years, I think he was, in the Senate, a former member of the Ku Klux Klan. That was never a big issue. Or President Clinton, his sexual harassment when he was president of the United States. That didn’t turn out to be a big deal. And I think things like that should be a big deal.”

On August 23, 1954, Grassley walked down the aisle with Barbara Ann Speicher and they’ve been happily married now for 63 years! The couple has five kids together, Wendy, Robin, Lee, Jay, and Michele—and Grassley is actually a great-grandfather to 11 kids! According to sources, Grassley is a part of ‘The Family,’ which is a firm that organizes the National Prayer Breakfast. Grassley’s grandson, Pat Grassley is serving as a member of the Iowa House of Representatives.

Keynote speaker at the National Biodiesel Board mtg this morning. Spoke about the value of biofuels to the environment, national security + rural economy

For his sheer hard work and determination, the National Research Center for Women & Families awarded Grassley with the “Health Policy Hero” award. Additionally, in 2010, The Hill newspaper named Grassley as the hardest Congress working member.