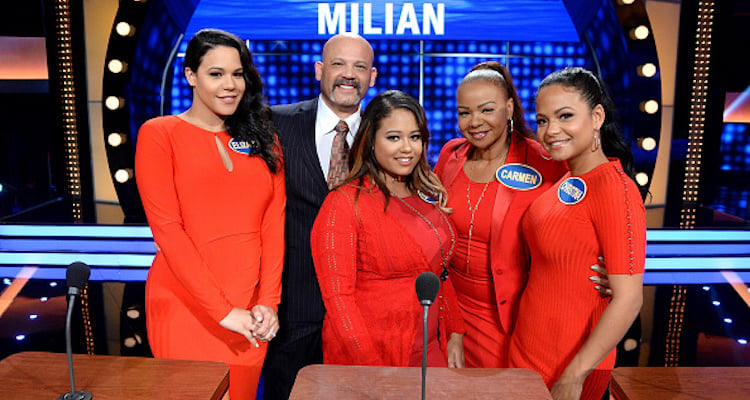 Christina Milian, aged 35, is a multi-talented Cuban-American entertainer who’s been working in different aspects of the entertainment industry since about 1996. Born in Jersey City, NJ, as a young child she always had aspirations to move to Hollywood and become a big star. As luck would have it, she was able to accomplish that goal when her mother decided to divorce her father and move her three daughters to California when they were still quite young. No doubt, Christina Milian is a triple threat when it comes to singing, dancing, and acting. In the beginning of her career, she was constantly being compared to the likes of Britney Spears, Christina Aguilera, and J-Lo. Despite all of her success, though, Christina Milian has always been comparably underrated by the media. This Christina Milian wiki has all of the latest news on the Dip it Low singer including her upcoming music, movies, kids, current boyfriend, and family’s appearance on the hit ABC show Celebrity Family Feud.

The Men in Her Life

It’s no secret that earlier this year Christina Milian was happily—and somewhat obviously—flaunting the hot young man in her life…we’re talking very young. The singer, actress, producer, and reality star was spotted hanging out with none other than 23-year-old New York Jets running back, Brandon Wilds. The two were seen canoodling in plain sight during an outdoor lunch date earlier this year. Unfortunately, after four months of enjoying each other’s company, the relationship ended badly when Christina found out Brandon was cheating on her with a woman who may or may not be having his baby. Talk about repeating the past!

Christina endured a similar heartache when she was dating Nick Cannon back in 2003 and found out he’d cheated on her with a slew of other women. The two are now on friendlier terms and have even been seen having lunch together on occasion.

For a little while there, it seemed like Christina Milian was making a pretty big comeback into the mainstream mindset. After all, she’d stepped out of the spotlight for a few years to pursue other endeavours and projects. She even had her own reality show called Christina Milian Turned Up, which ran for two seasons between January 2015 and January 2016. Even though the show wasn’t picked up for a third season by the network, it certainly made the Milians a household name again. The show centered around Christina’s daily life and her relationship with her mother, Carmen; her sister, Danielle; her other sister, Lizzy; and her daughter Violet Madison Nash, whom she had with the singer known as The-Dream. For the most part, everything seemed to going well for the Milian clan. Of course, the show depicted a lot of their family drama and broadcast their personal arguments as well, but it simply couldn’t be considered reality TV if there wasn’t some form of…reality. Unfortunately, this sometimes means that viewers are exposed to some very tragic moments in a celebrity’s life as well.

Throughout the series, Christina Milian’s sister, Danielle, was pregnant with her third child and there were some major complications. Earlier in the pregnancy, the baby was diagnosed with a condition called omphalocele, which causes the organs to develop outside of the body. Doctors warned Danielle that her baby’s chances of survival were severely low and advised her to terminate the pregnancy, but she refused and decided to see it through instead. Tragically, the baby passed away just one day after being born. The Milian family took to social media to express their grievances.

Yesterday I was blessed with the birth of my Richie Bear. Unfortunately, last night he took his place with the Lord and we said goodbye. I so appreciate the prayers and support from everyone. He touched my heart and was perfect in so many ways.

Danielle Milian posted this picture to her Instagram on August 26, 2015 after her newborn son tragically passed away just one day after his birth.

This incident seems to have brought the Milian family closer together over the past two years as the three sisters and their mom have been spotted at countless events since then and have always supported one another.

Here they are back in June 2015, just two months after the birth and death of Danielle’s baby. This photo is captioned, “#allhandsondeck #teammilian #nalip awards with my #familia #latinas.”

You can catch the Milian family on Sunday’s episode of Celebrity Family Feud. They’ll be squaring off against legendary funnyman and former Family Feud host, Louie Anderson and his family! Christina Milian, who’s appeared in a number of movies and TV shows throughout her colourful career, including Love Don’t Cost A Thing (2003), Man of the House (2005), American Pie (1999), and Grandfathered (2015-2016) will also be appearing in the upcoming horror flick, Shady Talez featuring Eminem and Dr. Dre.

Despite all of the hard work Christina Milian has put into her career and all of the multifaceted work she’s done over the years, her estimated net worth is reportedly only around $4.5 million.