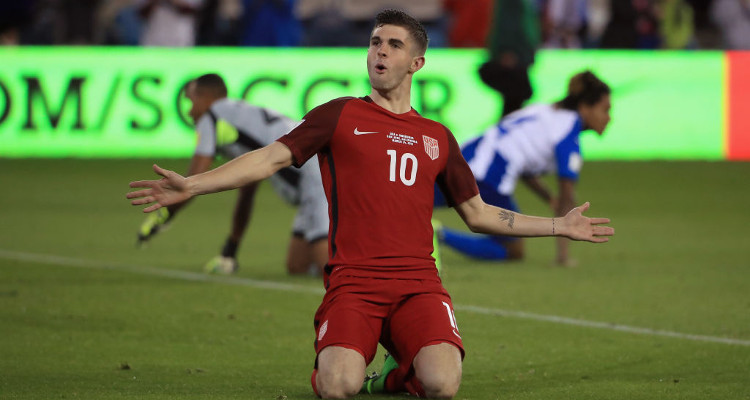 Christian Pulisic knows how to amaze —and he’s only 18 years old! He was instrumental in the win against Trinidad and Tobago that secured the U.S. national soccer team’s FIFA World Cup qualifying run.

Lately, there’s been no U.S. soccer player talked about more than Christian Pulisic. The teen player is already making history and he’s got a long career ahead of him. He scored two game-winning goals for the U.S. against Trinidad and Tobago in the FIFA World Cup qualifiers, and he’s going to be instrumental to the national team in the World Cup. If you haven’t heard of the kid who has clubs scrambling to sign him, here’s our Christian Pulisic wiki to get you started.

Soccer Mania Runs in the Family

Pulisic grew up in Hershey, Pennsylvania with his parents, Mark and Kelley Pulisic. His parents played collegiate football at George Mason University and his father also played professional indoor soccer for the Harrisburg Heat in the 1990s. Mark Pulisic later coached at youth and professional levels. Christian’s cousin, Will, represented the United States at the under-17 level as a goalkeeper, and plays for the Borussia Dortmund.

The family moved a lot with Christian’s playing and Mark’s job. When Christian was seven, he spent a year in England playing for the youth team of Brackley Town. When his father was general manager of Detroit Ignition (an indoor club) in the mid-2000s, Pulisic lived in Michigan and played for the Michigan Rush. When they returned to Hershey, Christian played for local U.S. Soccer Development Academy club PA Classics and occasionally trained with a local professional club, Harrisburg City Islanders, as a teenager.

Pulisic’s father took a youth coaching position at Dortmund. He drove his son around because he was too young to drive a car in Germany. “He drives me to training. I have my license in America, but you have to be 18 in Germany,” he said.

He Plays for Borussia Dortmund

At only 16, Pulisic was signed by Borussia Dortmund in the German Bundesliga. He typically plays as a central attacking fielder in the No. 10 role, or as a left-wing attacker. After playing for their U-17 and U-19 teams, he was called to join the first team over winter break. He scored two goals in his first nine appearances with the club, and is the youngest player ever to score two goals in the Bundesliga.

His grandfather was Croatian by birth, so Christian applied for Croatian citizenship after moving to Germany, in order to avoid applying for a German work visa. He declined an offer to play for the Croatian national team due to his commitments for the Dortmund and U.S. teams. Besides, Dortmund was reluctant to let him go. Pulisic reportedly earns a salary more than $1.0 million from Dortmund.

The teen is considered one of the top U.S. soccer prospects. He has represented the United States at the U-15 and U-17 levels, and captained the U.S. U-17 national team at the 2015 U17 World Cup in Chile. He has scored 20 goals in 34 games with the U-17’s during his two-year cycle with the team.

Pulisic may be matching senior soccer players toe-to-toe, but he’s still just a regular 18-year-old. There’s no word on whether or not he has a girlfriend, but he’s a Justin Bieber fan and plays Playstation. He once even tweeted Bieber for tickets to his concert in Germany in exchange for admission to a Dortmund game! Not a bad trade, if you ask us!