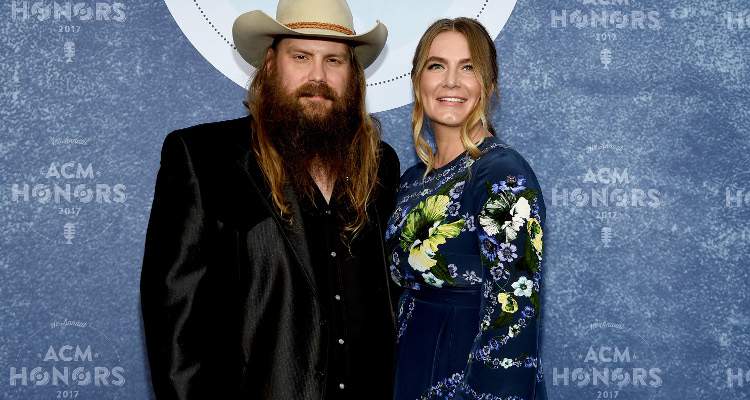 Chris Stapleton took home Album of the Year at the 2017 CMA Awards last night (November 8). On the personal front, he is already celebrating the latest additions to his brood. Does Chris Stapleton have children? Here’s what you need to know.

Country music’s biggest stars hit the red carpet of the CMA Awards 2017 last night. Chris Stapleton took home one of the highest honors of the night with Album of the Year. That makes it double, or should we say triple, the reason for celebration in Chris Stapleton’s family!

The singer’s wife, Morgane Stapleton, showed off her baby bump on the red carpet after revealing the good news a few days ago. Chris Stapleton and his wife are expecting twins!

Read all about Chris Stapleton’s twins and family here.

#1. His Wife Is His Duet Partner

Chris Stapleton may have worked with several big names in music, but his first and only duet partner is his wife, Morgane Stapleton. Born Morgan Hayes, she performs background vocals and harmony in Stapleton’s band.

Morgane Stapleton is a songwriter in her own right. She has written songs for Kellie Pickler, LeAnn Rimes, Alan Jackson, Lee Ann Womack, and Guy Clark, among others. However, she’s most famous for Carrie Underwood’s 2005 hit, “Don’t Forget to Remember Me.”

More than a decade ago, Chris Stapleton caught the eye of the budding songwriter from a neighboring publishing house. Hayes’ friend worked with Stapleton, and she often visited her friend at work while also looking for an opportunity to run into Stapleton. The award-winning songwriter fondly calls her his “stalker.”

The couple’s first date was a songwriting session, but they didn’t get much writing done. They married in 2007, after which Stapleton decided he needed a change in his career and left the group, The SteelDrivers, of which he was a frontman.

So, the Grand Canyon happened… ?: @andybarron

The songwriting team is already parents to two children. They have chosen not to reveal the names of their son and daughter to keep them out of the public eye. They do, however, talk about their kids during interviews.

Back in 2015, Stapleton won Album, Male Vocalist, and New Artist of the Year at the CMA Awards besting Sam Hunt. Sadly, his daughter is a big Sam Hunt fan.

“He had every reason to win [the CMA]. My daughter would have voted for him,” said Stapleton.

Stapleton’s daughter also believes her father has a lot of street cred in the country scene and that he can get her in touch with Sam Hunt.

“He won the AMA the other night,” Stapleton recalled about Hunt’s first AMA win for New Artist of the Year, “and my daughter was like, ‘I’m so happy Sam Hunt won. Daddy, can we text him? Do you have his number?’ I said, ‘No, honey, I don’t have his number.’”

While the couple protects their kids’ privacy, the 39-year-old chooses not to separate his personal and professional life. So, Stapleton’s kids often join him and his wife on the road.

“Well, my kids are riding on the bus with me. They come with me whenever they can, and I have my in-laws and my mother, who both live nearby in Nashville — we have a really good family support system.”

This sweet boy…happily occupying @meeschka's spot under the umbrella at the beach.

The expecting mom took to Instagram and posted a black and white portrait of them on their tenth anniversary, captioning it, “14 years, 2 babies, & 2 more on the way. Happy 10 year anniversary babe! You make my whole world go round.”

Before Stapleton’s big announcement, some fans were already aware of their big baby news.

At a concert a few days earlier, Stapleton gushed about his wife who was performing with him, “She’s the mother of my two kids, and she’s about to be the mother of two more.”

Recently, Morgane decided to show off her baby bump at the 2017 CMT Artist of the Year event where her husband was honored.