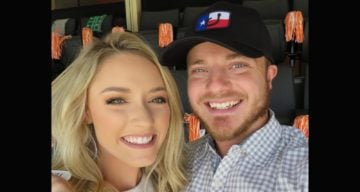 The Voice alum Emily Ann Roberts tied the knot with her longtime sweetheart, Chris Sasser. The country singer’s husband has been with her since before she hit it big on The Voice. They got engaged in 2019, and now married on November 7, 2020. There’s been lot of curiosity about Emily Ann Roberts’ husband since they got engaged. So, we’ve got Chris Sasser’s wiki for all the details on Roberts’ supportive beau.

Chris Sasser was born December 27, 1997 to Jeff and Lisa Sasser. Chris and his sisters, Stacey, Tiffany, and McKenzie, grew up in Knoxville, Tennessee.

Stacey Blevins still resides in Tennessee with her husband and kids. Her children often feature in Chris’ Instagram.

Tiffany Graham lives in Knoxville, and gave a shoutout to her little brother and new sis-in-law on her Facebook.

McKenzie, meanwhile, appears to have recently graduated from high school.

Chris’ parents also live in Tennessee. In November 2020, a GoFundMe page was created to pay towards Lisa Sasser’s heart surgery.

A former student-athlete, Sasser played basketball at Karns High School before graduating in 2016. His social media also indicates that he played football.

Since studying at the University of Alabama, Sasser has worked as a sales rep in his hometown. He often promotes the furniture he builds and puts on sale on his Facebook page.

Sasser and Roberts are high school sweethearts from the same hometown. Emily met her future husband in Spanish class when she was 16. They dated for five years, during which Roberts auditioned for The Voice in 2015.

Sasser proposed to Roberts in October 2019, on her 21st birthday. They got married on November 7, 2020 in Friendsville, Tennessee.

Their wedding was full of symbols that represent their relationship. Roberts’ wedding ring featured a guitar string, while Sasser had a ring made of wood to represent the furniture he makes.