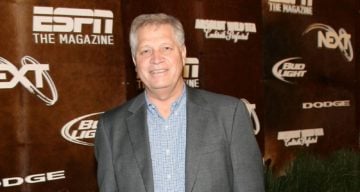 ESPN reporter Chris Mortensen arrives at the ESPN Magazine "NEXT" Party held at the NEXT Ranch on February 4, 2011 in Fort Worth, Texas. (Photo by Maury Phillips/WireImage)

There is some good news for American journalist, Chris Mortensen as he has disclosed that finally after eight long months of treatment and chemotherapy, he is cancer free. For those of you who have been searching for terms such as, “Chris Mortensen cancer,” “did Chris Mortensen smoke?” and “Chris Mortensen update,” then you have come to the right place because we will provide you with all the details you need to know about Chris Mortensen’s health update.

On January 15, 2016 Chris revealed via an ESPN statement that he was diagnosed with stage 4 throat cancer. For this reason, he took a break from his on-air work at the cable network. “More than a week ago, I was diagnosed with a Stage IV throat cancer,” Mortensen said in a statement on Friday. He added, “My focus shifted significantly to gathering information about the specifics of this cancer.” The initial diagnosis was confirmed Friday and there is another test remaining that will determine the best possible treatment plan that will commence in the very immediate future.

“Consequently, with the support and encouragement from ESPN president John Skipper and many others at ESPN, I am temporarily stepping away from my normal NFL coverage duties to better engage this opportunity to fight the good fight that is projected to affect almost 1.7 million Americans with new cases in 2016.”

He also said, “I have many inspirational examples of men, women and children who have faced this very fight. We all know somebody, right? I also have the love and prayers of my wife Micki, my family, my friends, colleagues and, most of all, my faith that serve as sources of tremendous strength. I have a peace about this and look forward to the battle.”

Recently, Chris has announced that he is virtually cancer free after eight long months of treatment. He claimed that the stage four throat cancer has been virtually diminished to zero. He said, “I do have scheduled exams and scans during the next three months to monitor my status but my oncologists have directed me to recover and rehab from the treatments that have resulted in lengthy hospitalization, significant weight loss, strength, endurance and related health issues.” He added, “I am following instructions to overcome these challenges.”

Nobody is sure whether the senior NFL analyst will resume his work, however, he did mention that he wants to be there for the some of the games of 2016-2017 season.

ESPN’s senior coordinating producer, Seth Markman said, “It has been a long and difficult road for Mort since he was diagnosed, so hearing his positive news is very encouraging.”

“As we have said all along, when Mort is able to return, his chair on our set will be waiting.” Seth further added, “He is a beloved member of our ESPN team and we have really missed him these past few months.”

Indeed it is a good news that Mortensen is cancer free and we hope he remains in good health and comes to work real soon. We are sure all the viewers miss his style of reporting on the games. Chris Mortensen was diagnosed with throat cancer without any reliable information of him smoking or not. Nobody should get into the habit or get addicted to smoking, because it is not healthy at all. If you want to know more information about Chris Mortensen, then don’t forget to click this link.