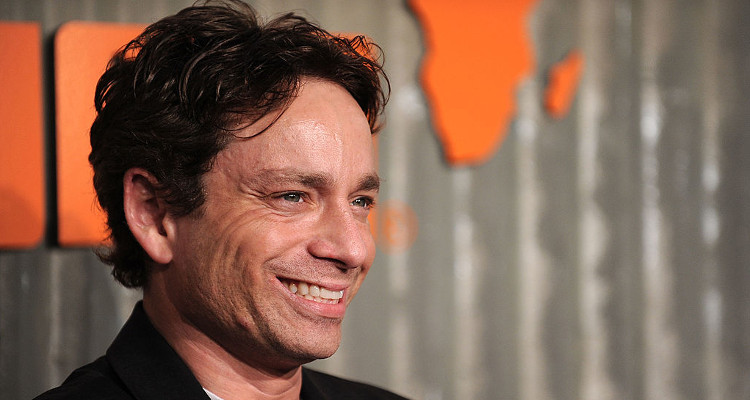 It’s week 2 of Dancing with the Stars, and the casualties are already piling up. SNL star, Chris Kattan danced through an injury while Heather Morris’ pro-partner, Maks Chmerkovskiy is out with his own injury!

Dancing with the Stars season 24 has entered week 2. While all the celebs and their pro-partners razzled and dazzled on the ballroom, Chris Kattan knew he looked stiff on the dance floor. The comedian has been struggling with an injury for years, and it has affected his dancing. However, he still managed to put on a smile and dance his way through a broken neck. Unfortunately, he and his partner, Witney Carson were the first pair to be eliminated from DWTS season 24. What’s wrong with Chris Kattan’s neck? Here’s his emotional revelation.

Chris Kattan Opens up about His Injury

The funnyman moved us to tears on DWTS when he spoke about his traumatic injury. In a pre-recorded clip that aired before his performance with Witney Carson, Kattan said, “Last week I had a great time, but Carrie Ann [Inaba] said, ‘Try not to be so stiff.’ My first thought was, ‘I don’t know how to do that.'”

Chris had broken his neck nearly 20 years ago in a work-related stunt accident. He refuses to specify what exactly happened stating, “It was a stunt thing. I can’t get into it with you.” The 46-year-old has a network of screws and rods in his spine, as a result of surgeries he had to undergo to treat his injury. “I broke my neck and I had four surgeries regarding that the last 20 years basically. One in my back, one through the throat … I had to be careful for a really long time,” he said, adding that being out of commission felt embarrassing to him.

But the comedian has made headlines in recent years for his erratic behavior. He blames it on the painkillers prescribed to him after his surgery. “Part of what I used to do was physical comedy, but now I can’t,” an emotional Kattan said. “It’s really sad when somebody says, ‘I miss the old Chris.’ That sucks to hear,” he added.

The Comic Bids Adieu to the Ballroom

Kattan made his ballroom debut on the season 24 premiere last week, but had been approached to join DWTS before. “They asked me twice,” said Kattan. “At that time I wasn’t ready for it yet, physically. I had to be at the right level of health and spirit and all that.” He told People, “[Now] it’s perfect timing. I wouldn’t have been able to do this 5 or 10 years ago.”

Kattan’s pro-partner, Witney Carson was nervous about his injury saying, “It’s definitely concerning because breaking your neck is a serious injury. I’m a little scared, but I want to push him, so the judges see that he is a contender. It’s a hard balance.” Carson also told People, “The first two weeks [of rehearsal] have been a lot of test and trial to see what he’s capable of. But he’s fearless.”

Chris and Witney were at the bottom of the leaderboard for two consecutive weeks, though he didn’t break Master P’s record of the lowest score in DWTS history. The story of his physical battle made us want to root for the beloved Corky Romano. But Alas! Chris and Witney were the first couple to be eliminated from DWTS season 24.

After his elimination, Kattan expressed his regret that the reason behind his stiff dancing should have been revealed to the viewers earlier. “When I got on the show I was like, ‘The only way I’m going to do the show is if they know that, you know, I’ve had surgery and stuff in the past,’ you know?… Otherwise, I’m gonna look kinda like a lame-o or whatever,” he said.

Nevertheless, we’re glad to have seen at least two dance routines from Kattan! As he said, this might not have been possible for him five or ten years ago. Kudos to Chris Kattan for being an inspiration.

Dancing with the Stars season 24 airs every Monday at 8:00 p.m. EST only on ABC.