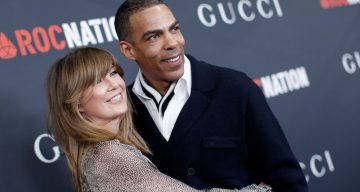 Despite the fact that Ivery is married to a rather famous actress, not much is known about him. Pompeo and her husband are very good at keeping their private lives private. That being said, here’s what we know about Ellen Pompeo’s husband. He was born in 1967, which puts Chris Ivery’s age at 50. He was raised in Cambridge, Massachusetts.

With regards to his career, Ivery is a music producer. We haven’t been able to dig up much in regards to his work, but we do know that he co-wrote the song “Cheers (Drink to That)” which appeared in an episode of the hit show, Smash.

As the story goes, Ivery and Pompeo met at a grocery store in Los Angeles, but didn’t actually start dating until about six months later. As they began dating, the couple discovered that not only did they both grow up in Massachusetts (Pompeo was born in Everett), but they actually grew up about 10 miles away from one another! As both grew up in the Boston area, Pompeo and Ivery are huge Boston Celtics fans, and have been seen at games a number of times.

Ivery proposed to Pompeo on her 37th birthday, and the two quietly got married at New York City Hall in November 2007. Attending the ceremony was then New York City Mayor, Michael Bloomberg. In 2009, the couple welcomed their first daughter, Stella, into the world. Their second child, Sienna, was born in 2014 through a surrogate. In 2016, the couple were blessed with a son, Eli Christopher.

Ivery and Pompeo tend to live fairly simple lives outside of the spotlight. Pompeo has a very busy schedule, combined with the fact that her and Chris Ivery’s kids are still very young, so date nights are pretty simple and often at home. But Pompeo mentioned in interviews that the two do have quite a few lunch dates as it tends to fit their lives and schedules better.

While there have been numerous rumors and gossip over the years in regards to cheating and Chris Ivery and Ellen Pompeo’s relationship, a decade after they got married and three kids later, the two seem rock solid.