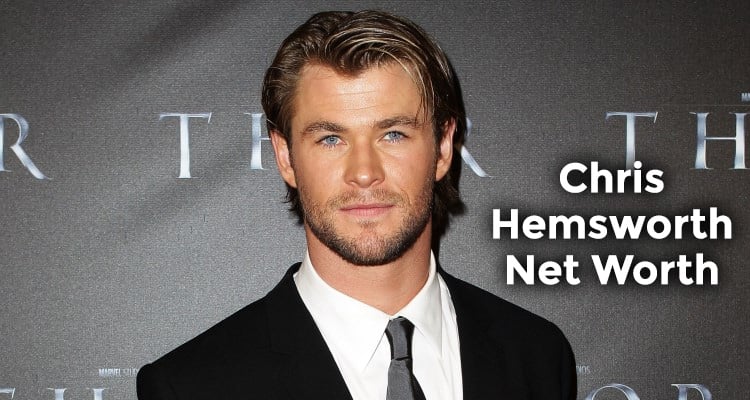 How much is Chris Hemsworth worth? Believe it or not, Chris Hemsworth’s net worth is $60.0 million! The Thor actor is set to star in the upcoming military film, Horse Soldiers.

Chris was born on August 11, 1983 in Melbourne, to Leonie (nee Van Os), an English teacher, and Craig Hemsworth, a social services counsellor. Chris is the middle of three boys: his brothers Luke (older) and Liam (younger) are also actors. He attended high school at Heathmont College before pursuing his acting career.

Chris is known best for his role as the Marvel demigod and superhero, Thor in the 2011 movie Thor. Chris, originally slender, put on 20 pounds of muscle for the role and has since played this role in The Avengers, Avengers: Age of Ultron, and Thor: The Dark World. Chris is also set to reprise his role in Thor: Ragnarokand Avengers: Infinity War.The news was announced earlier in 2016, but will release in 2017!

He also played Captain Kirk’s father (George Kirk), in the rebooted Star Trek franchise and starred as the huntsman in Snow White and the Huntsman. He also reprised that role in the second installment of the movie inThe Huntsman: Winter’s War, but shockingly, it wasn’t well-received at the box office.

In early 2010, Chris,33, began dating Spanish actress, Elsa Pataky,40, after meeting through their mutual representatives and were quickly married. The Avengers star proposed to the Fast and Furious actress just months after meeting her! He revealed on Good Morning Britain:  “It did happen quick and it just felt right, just, it made sense. There was no great plan to any of it to be honest, we were on holiday and we said ‘why don’t we get married too?’”The couple seem to have been in marital bliss ever since.

However, in October, media outlets rumored that Chris and Pataky were having marital problems, resulting in Chris allegedly looking for a new wife. Chris responded in an Instagram post, shutting down rumors in the best possible way.

Posing aboard a boat and looking out to sea, Chris wrote on Instagram: “Looking for a new wife according to @womansdayaus and other misleading outlets! Honey, you still love me right?! @elsapatakyconfidential #thanksfortheheadsup. [sic]” (Sorry everyone, but it looks like the happy couple are just that—happy!)

Chris and Pataky have three children together: 2-year-old twin sons, Sasha and Tristan, and 4-year-old daughter, India Hemsworth. Chris is known to be very involved in his kids’ lives and even made the conscious decision to move them from Los Angeles to Australia. He moved them away from the chaos of Hollywood in order to give them a normal childhood and was able to move the whole family, since he no longer needs to be based in Los Angeles to secure work.

He’s also very supportive of his children, no matter what they want and how outrageous it may sound. A perfect example is when Chris was onTheEllen DeGeneres Show, recounting the time when his daughter, India, wanted a penis to fit in with her father and her brothers! Such innocent minds make for the best stories!

Hilariously, Chris explained to Ellen the way in which his daughter approached the topic, telling him that she wanted what her brothers have. When he didn’t understand what she was referring to, she said she was talking about that thing they both have between their legs!

“How do we handle this?” he said laughing with Ellen, before recalling how he tried to explain to little India that girls have breasts, and boys have penises. “I’ll have to pick that conversation up in a few years’ time,” he added.

Chris isn’t alone in the acting business, as he is joined by his two brothers Luke,35, and Liam,26. Luke has currently taken on a role in the HBO sci-fi drama, Westworld and Liam was recently in Independence Day: Resurgence. Liam is also engaged to singer and actress, Miley Cyrus, which means Chris will soon have a new sister-in-law!

The god of thunder needs a home worthy of his queen and family, so why not live in a beautiful earthy mansion? The Thor actor reportedly spent $7.2 million on a mansion in Byron Bay, Australia! The estate, overlooking the sea, is 4.2 hectares, has eight bedrooms, three additional villas, and eleven bathrooms, overlooking Seven Mile Beach. It sounds like a dream!