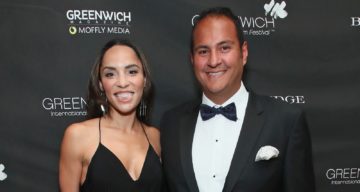 Celebrity dermatologist Dr. Kim Nichols and her family were charter guests on Below Deck Sailing Yacht. And her stint on the Bravo show has been dramatic, to say the least. After an accidental nip slip, she’s the talk of the town. Below Deck viewers want to know more about her family, especially Dr. Kim Nichols’ husband, Chris Cabanillas. She has often spoken about their marriage, his amazing work, and how he supports her successful career. We reveal more about him and their relationship in this Chris Cabanillas wiki.

Chris Cabanillas was born on July 30, 1975, and grew up in Tarrytown, New York. He is the son of Hispanic immigrants who moved to the United States.

His mother is from Colombia, and his father is from Peru. They overcame language barriers and other difficulties and ran a landscaping business.

Growing up, Chris Cabanillas saw that his parents depended on attorneys to make financial decisions regarding their business due to their limited English language skills. According to Chris, their non-Spanish-speaking attorney did a mediocre job.

His parents knew that many Hispanic immigrants would benefit from having an attorney fluent in Spanish and English. That’s how they encouraged young Chris to become an attorney for the Hispanic community.

After graduating from Hackley School, Chris Cabanillas received his BA in history from the University of Massachusetts at Amherst in 1997. He received his JD from Columbia Law School in 2001.

Cabanillas established several law firms to help people like his parents who needed an attorney. He is the founder and president of Cabanillas & Associates, P.C., with five locations in New York and two in New Jersey. He also has another location in Greenwich, Connecticut, where he works as an attorney and where his family has been living in recent years.

Dr. Kim Nichols is also from Tarrytown and a Hackley School alum. She met her high school sweetheart, Chris Cabanillas, through her best friend, and they have been together since. The best friend who introduced them became Nichols’ maid of honor at their wedding.

Also Read: Who Is Kim Wolfe’s Husband? Meet Bryan Wolfe, the HGTV “Why the Heck Did I Buy This House?” Star