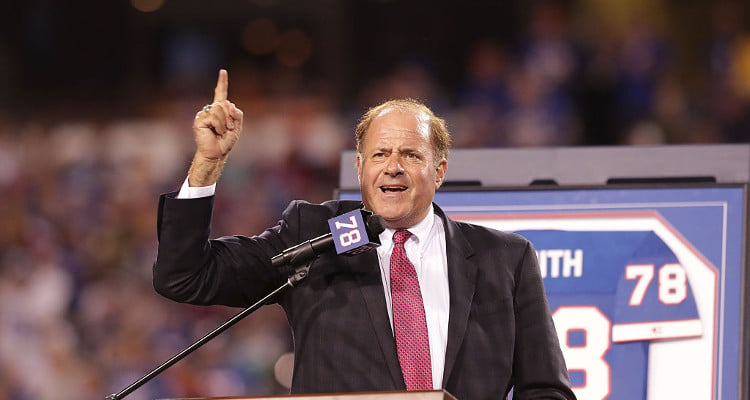 Veteran ESPN sportscaster, Chris Berman is dealing with the tragic news of his wife’s death in a fatal car crash. Despite having a net worth of $18.0 million and two children, his life without Kathy is not going to be easy.

Chris Berman lost his wife in a car accident that occurred on Tuesday, May 9, 2017. How did Chris Berman’s wife, Kathy Berman, die? According to sources, Kathy died in a fatal car crash as she was driving near her home in Connecticut. Her vehicle collided with the back of another car and veered off the road. The car then flipped over into a small body of water and Kathy was killed on the scene. The driver later succumbed to his injuries in hospital. We have more details from Chris Berman’s wiki, right here.

Chris Berman was born on May 10, 1955 in Greenwich, Connecticut, to Peggy Tenenbaum and James Berman. He grew up in Irvington, New York, and studied at the Hackley School and enrolled at Brown University for his bachelor’s. Berman graduated with a degree in history in 1977, and was the sports director of the school’s radio station, WBRU.

Alright this is a tough one… one of my favorite sportscasters of all time (Chris Berman, Above) has lost his wife due to a car accident. and on top of that today is Chris' birthday. So sorry and my condolences to the family and friends of Kathy Berman. #Espn #chrisberman #berman

Berman began his sportscasting career with Hartford’s WVIT-TV, as a weekend sports anchor. He later joined ESPN in 1979, a month after its founding, and has been with the network ever since. He was the host of several programs in his long career, including Sunday NFL Countdown and Monday Night Countdown. Berman developed his own inimitable style of commentary as a sportscaster, and his fans loved him for it. He became well known for his catchphrases and player nicknames, appearing in movies like The Waterboy, The Longest Yard, Necessary Roughness, The Program, Little Big League, Eddie, and Kingpin.

Suffering from the Loss of His Wife

This man (beloved by so many), Chris Berman of ESPN, just lost his wife of 33 years in a car accident. He didn't wake up yesterday thinking that would be the last time he would see his wife. They were all probably "going on about their business" and then tragedy struck. PLEASE (and I'm speaking to myself as well), let's stop going through the motions and ignoring who/what is important. Life is precious, and we can miss it doing "stuff" we THINK is important. #ChrisBerman #Berman #tragedy #ESPN #life #marriage #connecticut #football #sports

At Chris Berman’s age of 62, many believe that he would want a break. In 2016, there was talk of Chris Berman retiring, but that did not happen. He signed a new contract in January 2017 for a reduced schedule, but remained at ESPN much to the delight of his fans. For a long time, he was the face of ESPN as far as viewers were concerned. However, Chris Berman’s family life was shattered irrevocably when his wife Kathy died on Tuesday. Kathy is survived by her husband and two children, Meredith and Douglas.

Money is No Problem

Thanks to his long career with ESPN, money has never been a problem for the sportscaster. With a salary of $3.0 million a year, it is no wonder Chris Berman’s net worth is a cool $18.0 million. He might decide to spend more time in his Maui house when he decides to retire. Berman owns a beachfront house near Lahaina, Hawaii. Chris Berman’s house has four bedrooms, five bathrooms, and terrific views from the balconies covering over 4,320 square feet.

As news spread of his wife’s death, Berman’s fans, friends and colleagues are sending their condolences. ESPN president John Skipper said in a statement, “This is a devastating tragedy and difficult to comprehend. Chris is beloved by all his ESPN colleagues and for good reason: He has a huge heart and has given so much to so many over the years. We know how much his family means to him and all we can do at a moment like this is give him the love and support he will surely need at this hour. Our thoughts and prayers are with Chris, Meredith, Doug and the entire family.”