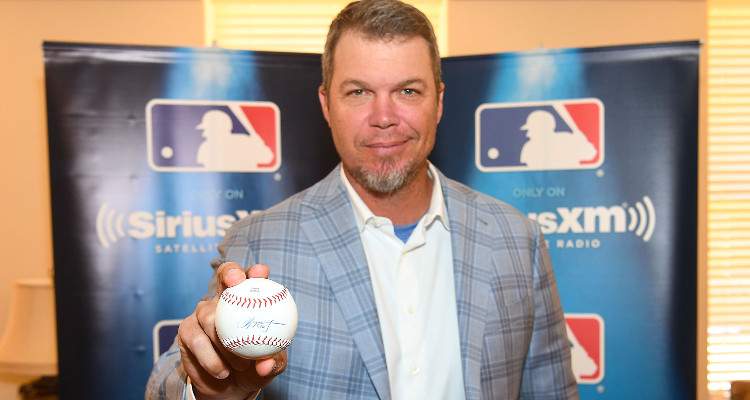 Chipper Jones’ wife, Taylor Higgins, certainly has reason to celebrate. The former Atlanta Braves superstar was inducted into the Baseball Hall of Fame. Chipper Jones’ relationships have been a hot topic throughout his career, but none more so than his current wife.

The Baseball Hall of Fame has a class like no other this year. Chipper Jones is one of four legends elected, one of the largest classes ever inducted into the Hall of Fame. The former Atlanta Braves’ third baseman, who gave the Mets a run for their money for 19 years, was inducted in his first year of eligibility.

It’s double the celebration in the Jones family in January as Taylor Higgins is celebrating both her husband and her son!

Find out about the MLB star’s gorgeous wife, right here in our Taylor Higgins wiki.

Chipper Jones met Karin Fulford while playing for the Atlanta Braves’ Class A affiliate in Georgia. They married in 1992, but their marriage fell apart when it was revealed that the MLB player cheated on her for 18 months.

The other woman was a Hooters waitress from Michigan, whom he met during the 1997 spring training in West Palm Beach, Florida. Jones admitted he has a son, Matthew Jones (born in 1998), with the unnamed woman.

Fulford initially stuck by him and worked on their marriage. However, they eventually got divorced, and Jones married a second time.

Jones’ second wife, whom he married in 2000, was Sharon Logonov. They have three sons—Larry Wayne III (Trey), Tristen, and Shea Jones. However, they separated in June 2012, and their divorce was finalized in November.

Only two months after the divorce, Chipper Jones had a new romance: Taylor Higgins.

Nothing beats a fam photo w/ the championship trophy at the NBC World Series! Congrats to the rest of my brothers w/ the Kansas Stars! pic.twitter.com/e2ApXvZ1Dc

She Was a Playmate

Shortly after his second marriage ended, Chipper Jones was dating Taylor Higgins. But she was better known by her modeling persona, Lexi Ray.

The former Playboy model was described as “a ‘Coed’ who specialized in naked shower videos and your run-of-the-mill naked photo shoots.”

Happy anniversary to my sweet husband!! You continue to rock my world and I'm thankful to call you mine ? pic.twitter.com/wgJzF89Bmj

According to her Playboy profile, she attended the University of Kentucky. She was named Playboy Coed of the Month in March 2010.

She also shares Jones’ love for hunting. Her Twitter activity is limited, but her husband shared pictures of a hunting trip they went on together.

Although she rarely posts on social media, Higgins shows her support for the Atlanta Braves during games. Jones and Higgins married in June 2015, and she became stepmom to his sons from his previous relationships.

Little man is excited for the new addition…..as are we! pic.twitter.com/mhJ7JfEaGQ

Jones announced in 2016 via a cute tweet with a photo of himself, Higgins, and one of his sons, that they were expecting a baby (the first for Higgins and fifth for Jones). Cutler Ridge Jones was born on January 11, 2017, and celebrated his first birthday this month.

Now, Chipper Jones and Taylor Higgins’ baby’s birthday celebrations have been topped by his dad getting inducted into the Baseball Hall of Fame! Both are huge reasons for this happy family to celebrate!

In what seems like a blink of the eye…my baby is 10 weeks old. #toofast pic.twitter.com/5IA1sN4ARK