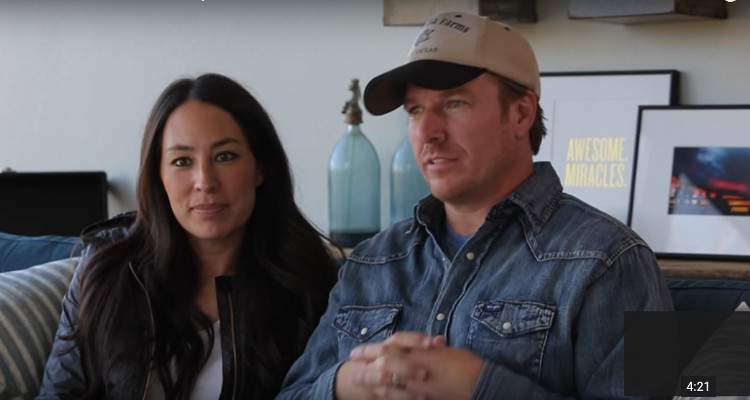 It’s perfect timing that the TV show, Fixer Upper, is winding down it’s fifth and possibly last season because Chip and Joanna Gaines are getting ready to welcome a fifth baby into their family. Thanks to their hard work, talent, and passion, Chip and Joanna Gaines’ net worth in 2018 is estimated at around $9.0 million each and growing, according to sources. They have just bought a lavish house in Waco, Texas, and are excited about moving in with their four kids.

Chip and Joanna are thrilled because Joanna Gaines is pregnant again after a gap of several years. That’s right! It’s baby number five for the duo as they go about winding down the work in the fifth and possibly last season of their popular TV show, Fixer Upper. And, it sure looks that they have been secretly preparing for the baby in the last few months, even as they have been working hard at flipping houses.

Gaines’ husband, on the other hand, wasn’t eager to have kid number five at the time. He felt as though they were already struggling to raise the four kids they currently have.

However, Chip Gaines changed his mind later and is now the most enthusiastic person as their fifth child is on the way.

Do Chip and Joanna Still Live at the Farmhouse?

According to reports, Chip and Joanna Gaines still live in their farmhouse in Waco, Texas, with their four children and an assortment of animals. However, this might not be for long as the couple has bought a stylish house in Waco and may move into it at a later stage.

Joanna Gaines’ house is a 4,831-square-foot home that was built in 1903 and has since been renovated by subsequent owners. It has gleaming hardwood floors, large living and dining rooms with French doors and built-ins, a spacious country kitchen with ample counter space, a wood-paneled study, a fireplace, two large porches, and a guest cottage at the back.

It is unknown what the Gaineses paid for this house, which was listed at $498,000. But, it is large enough for their four kids to have fun and frolic around, not to mention for the fifth child who is on the way!

Do They Keep the Furniture in Fixer Upper?

People have always wondered if the owners of the flipped house get to keep all the furnishings that Joanna Gaines uses to decorate the house that the viewers see at the end of each episode. The answer, unfortunately, is no!

The owners of the redesigned house do not get to keep all the beautiful furniture and furnishings when they move into the house. That’s because every piece comes from Joanna Gaines’ store in Waco called Magnolia Market and are put in the house to make it look warm and inviting. However, these pieces can be bought by the new owners and even TV viewers.

A Healthy and Rising Net Worth

Thanks to their flourishing business, both Chip and Joanna Gaines are raking in the money. And, every penny of it is well deserved.

Who's watching with us tonight??!! So excited for the #fixerupper Season 5 premiere at 9/8 pm CST! @hgtv ❤️

Fixer Upper also helps to advertise the Gaineses products. Every piece on the show is sourced from Magnolia Market and is available for sale.

Right now, the Chip and Joanna Gaines are working on the winding down of the show, Fixer Upper, and focusing on their baby who is due to arrive in 2018. We wish the couple all the best in their future.