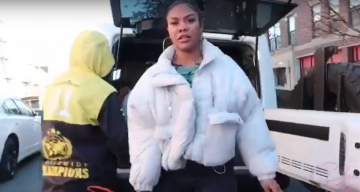 Fans of Love & Hip Hop have more drama to look forward to as the franchise has now expanded to Miami!

While some fans may be familiar with Chinese Nicky, many people want to know more about her daughter. Keep reading Chinese Kitty’s wiki to get all the details about this Love & Hip Hop Miami star.

Born Taylor Hing on January 18, 1995, in Queens, New York, Chinese Kitty’s age is 23. She is of Chinese and Guyanese heritage.

Chinese Kitty gained popularity through her appearances in music videos. Many fans may remember her in videos for celebrities like T.I., Fabolous, and Ludacris. She also starred in the music video for Young Dolph’s “Forever.”

She has now set her sights on becoming a famous recording artist. Her new single “On Me” is out now!

Chinese Kitty has a young son, and you’ll find a few pictures of her adorable boy on Instagram.

Twinning with Her Mother, Chinese Nicky

Being in the limelight runs in the budding singer’s blood. Chinese Kitty’s mother, Chinese Nicky (her real name is Nikhol Hing) is a popular socialite and entrepreneur who appears in this season of Love & Hip Hop Miami.

Chinese Nicky was pregnant with her first child when she was only 14 years old, but that did not stop her from following her dreams.

She started off as a waitress and ring girl in Vegas, before earning a degree in fashion design. From there, she designed the The Nikhol Hing Collection and opened Klothh in South Beach.

The mother-daughter duo sure make a fierce team, and we can’t wait to see the drama they will unleash on the rest of the cast members on Love & Hip Hop Miami!

Head over to Chinese Kitty’s Instagram to see why she has 1.8 million followers! If you want to learn to take a perfect selfie, she will show you how. Her perfect pout and amazing curves are what have garnered her such a huge fan following!

The Rise of Chinese Kitty

Even though Chinese Kitty is now a popular social media celebrity, she was bullied as a kid, especially for her lack of curves.

In an online interview, she shared about how others would make fun of her saying, “I was always the flat-chested girl. I always got picked on… They used to call me mosquito bites.”

She had breast augmentation surgery when she was 19 years old, and had liposuction after the birth of her son.

22, Boss, About my paper, living life, Mother of a beautiful son, each day learning from every little mistake, every day growing with each step I take. So you could either love me or hate me it’s no in between with CK❤️

Chinese Kitty has had her share of negativity on social media, but this is one girl who doesn’t care!

Things are looking up for the Instagram star. With her new single out and appearances on Love & Hip Hop Miami, the sky is the limit for Chinese Kitty!